I’m in love. And his name is Modern Steak. He’s has just enough flash, a sense of humor, dresses well and, best of all, he sure can cook. This just-opened addition to the new Scottsdale Fashion Square wing is the most recent offering from Valley restaurant maven, Sam Fox. If you’ve been living under a restaurant rock, he’s responsible for Bloom, Sauce, Blanco, Olive & Ivy and True Food Kitchen. Modern Steak is definitely his most high-end restaurant to date (which is a an odd thing to feel about a mall restaurant) and we’re lovin’ it.
I have to first talk about the gorgeousness that is Modern Steak. The dining room is decked with glossy chandeliers, majestic booths, a lovely cut-out ceiling, darks woods, brocade prints and is swathed in white, baby blue, purple and orange. Truly a stunner. The women’s bathroom is also a standout. A white couch greets you as you walk in and hot pink decorates the walls–it’s as if Barbie should call the place home. My favorite element is the patio that faces the mall parking lot–however, you’d never know the parking was there thanks to the huge, white laser-cut divider that saves patrons the eyesore. It’s also a nice option for sunny Arizona, as it acts as a nice shade. The patio also has a pair of two-sided fireplaces and plenty of colorful seating areas. During the meal, my co-worker and I both commented that we’d love our yards to look just like the Modern Steak patio.
And, thankfully, the food isn’t outdone by the decor. Though I felt the portions were on the small side (I went there for lunch), especially for the slightly steep price tags, I liked every bite I took. Let me start with the freebie bread: awesome. Warm and soft, I could have gobbled up several pieces of the Parmesan bread. The lobster salad was chock-full of meaty lobster chunks, but not much corn, potatoes or green beans that also graced the salad. It was divine, though–they do say the best things come in small packages. The ahi tuna poke salad was also yummy, and a lighter, more refreshing option. Very flavorful. For dessert, we indulged in the decadent peanut butter cup treat–amazingly creamy and didn’t have even a hint of fake peanut butterness. Though it’s more suitable for two to share, you can definitely split it among four friends after a big meal as it was mighty rich. As for drinks, I like the Modern Swizzle with 10 Cane Rum, lime juice, and raspberry and orange bitters topped with elderflower and soda. http://foxrc.com/modern_steak.html. 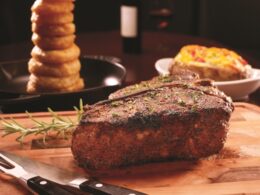 Next weekend (June 16), celebrate daddy dearest at one of these tempting Valley restaurants, all offering Father’s Day…
byMelissa 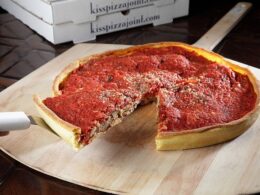 A Taste of KISS

When it comes to pizza joints in Scottsdale, the more the merrier. So when KISS (which stands for…
byMelissa 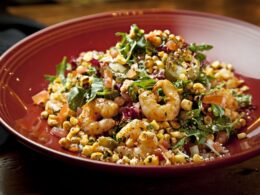 A Taste of SOL Mexican Cocina 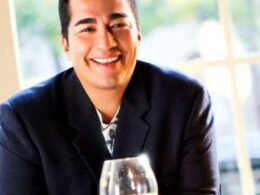 East meets West in the newly opened The Saguaro hotel, which boasts more than your average weekend destination.…
byMelissa