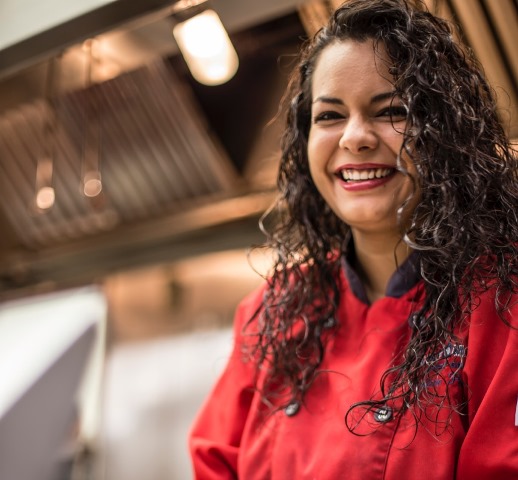 Chef name: Marlene Portillo
Restaurant and location: Half Moon Windy City Sports Grill in Phoenix
Web site: www.halfmoonsportsgrill.com
Social media: https://twitter.com/HalfMoonAZ =, https://www.facebook.com/HalfMoonBT?ref=hl
What inspired you to take part in the Taste of the NFL’s Kick Hunger Challenge “Flavors of the Valley” competition? I love sports especially Football and giving back to the community.
Any hints as to what you’ll be dishing up at the Taste of the NFL’s Party with a Purpose if you win? Slow-roasted pork belly with saffron risotto and crème brulee.
Say you’re hosting a Super Bowl party. What dish do you serve to guests? Fancy nachos. Truffled cheese sauce with fried duck. Would bring posole for everyone’s hangover the next day.
Have you always had a passion for the culinary arts? How did you get your start? Yes! Started cooking with my Nana since as long as I can remember. Always wanted to be a chef. Attended Le Cordon Blue in Scottsdale.
What do you love most about what you do? I love to see peoples faces after trying my food!
What are your goals for the coming year? Adding exciting new items at Half Moon Windy City! Starting my own cooking classes.
What food bank are you representing? St Mary’s Food Bank Alliance

And a few fun faves…
Favorite Super Bowl memory: When the lights went off for the 49ners and Seahawks game
Favorite sports-watching snack: Cheese!
Favorite cocktail to whip up for Super Bowl guests: Michelada aka Bloody Beer!