When Phoenix artist and award-winning author Sandra Marshall posted a funky food art of Congressman Bernie Sander’s epic photo-turned-meme from the 2021 Presidential Inauguration on social media, she never dreamed it would go viral. Then a friend called her, “You aren’t going to believe this, but (author) Stephen King just tweeted out your Bernie!”

With over 6 million hits on social media, “Ernie in Eggplant, Potato and Kale” (aka Taste the Bern) has been featured in media outlets worldwide. In addition to King, S.E. Hinton, the author of the literary classic The Outsiders, is also a fan and has tweeted her work.

“Everyone is eating it up!” laughs Marshall.

The now internationally known food artist and author has released her second book, The Razzle Berry Wackadoodle Garden, to introduce children to plant-based eating through a charming story featuring fruits and veggies made into uber-creative works of art.

In The Razzle Berry Wackadoodle Garden I want kids, and parents, to see fruits and vegetables through the eyes of an artist. Healthy plant-based foods are an amazing gift we often take for granted.

Her first book, One Hot Night at the Veggie Bar, was an immediate best-seller when it was published in 2017. In 2020, it was a finalist earning a Silver Award in the NIEA (National Indie Excellence Awards) for its combination of steamy stories combined with pictures of funky food art geared towards adults.

My first book was definitely not for kids!

She says her latest book is a story of exploration and discovery which took her four years to complete due to her busy schedule.

The Razzle Berry Wackadoodle Garden takes children on a trip through a beautiful garden made from actual plant-based ingredients. The orange sunsets are made from a close-up of a peach’s skin, and the purple mountains are made from red cabbage. Every single photo has layers and layers of healthy fruit and veggies as art. The pictures in the book are from our dinner ingredients each night. We never wasted food

As you open the book all the fruits, vegetables, nuts and grains and other plant-based ingredients used to create the art are listed. But as you go through the story, part of the fun is guessing what I used for the pictures. It starts a conversation. I think adults will enjoy it as much as the kids.

The New York native attributes much of her creativity to childhood trips to New York City where the art and culture was never ending. In her early years she studied at a private art institute. Art was part of her everyday life, she says.

Marshall became accomplished in a variety of mediums including oils, pastels, acrylics, and mixed media, and later earned her Bachelor of Arts degree in Education with an emphasis in Art Education/ Painting from ASU. Marshall is also trained in photography (by her mother, a professional photographer) and video editing, and has worked as an art director in Hollywood in addition to painting backdrops and working on set designs for the Disney Channel.

She has sold her art internationally through private and corporate commissions and her work has been featured in major publications and on television. Before marrying and starting a family in the United States, she also studied art in Italy which led to co-creating an inventive company in Italy called “Porta a Porta,” which means door to door in Italian.  At Porta a Porta, she taught aspiring artists how to paint in the Tuscany countryside.

After settling in Arizona, she owned Be..An Artist Studio in Phoenix from 2014-2019 where she taught children and adults to paint. It also became a popular event venue on weekends featuring live performers from MTV, Last Comic Standing and the David Letterman Show.

She decided to close the studio to focus on her artwork and to expand her business, hosting large painting events at different venues. She was the official artist at the 2019 NFL owners meeting held at the Biltmore in Phoenix.

Then the pandemic hit, giving Marshall the time to complete her latest book, and giving her time to teach art to children at schools in Arizona via Zoom. A portion of the proceeds from her latest book will fund art programs for kids. She says she is seeking sponsors to help her expand the innovative program nationwide.

Marshall says she never really thought about food as an art form until 12 years ago when her five-year-old daughter, Elena, suddenly announced that she did not want to eat meat. That is when Marshall began seeing plant-based foods in a different light.

My daughter inspired me to create dishes that were nutritious but also colorful and fun to look at and delicious to eat. When people started seeing my work, they loved it! I then started experimenting with different ingredients and combining the ‘art’ with stories about each piece.

She adds that she, Elena, her 14 year-old son Max and husband Greg, are all healthier for the change.

The Razzle Berry Wackadoodle Garden is available exclusively at www.sandramarshallart.com for $23.95 plus shipping. 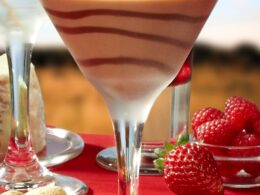 Chestnuts roasting on an open fire? Nah–we’d prefer marshmallows. This season, The Melting Pot has the most delicious…
byMelissa 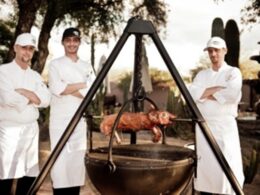 We love a break from the norm, and Lon’s at the Hermosa Inn is offering just that (a…
byMelissa 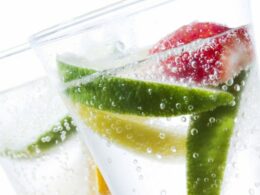 It’s been a month since 2012 began–did you keep your get-fit resolution? For those who kept their eye…
byMelissa 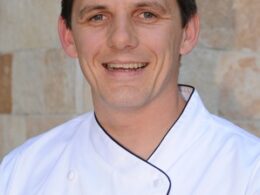