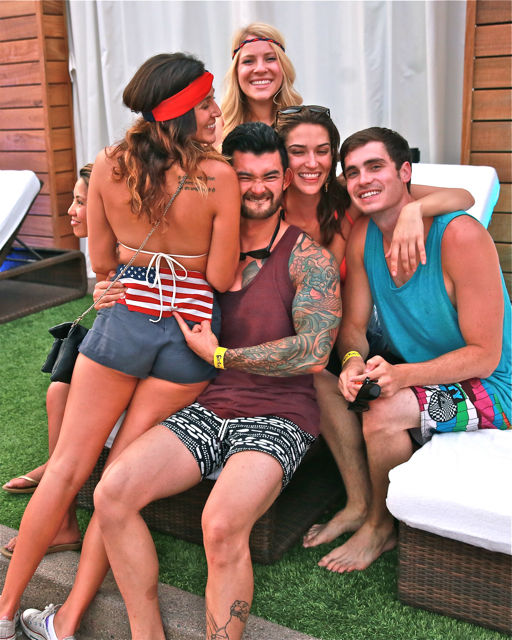 Fatboy Slim’s performance at Maya Day and Nightclub transitioned day-drinking to nightlife. As the sun set, the ear numbing, grooving bass of the DJ veteran rattled through the the club.

Norman Cook, a.k.a. Fatboy Slim, danced inside the DJ booth, parading a loose Hawaiian shirt and board shorts. His intensity and high-energy had the back stage banging, as sun cooked skin covered in wet bikinis and board shorts — with a smell of chlorine, sunscreen and vodka — danced mindlessly around the DJ pit.

At times Cook was reminiscent of a mad scientist behind the tables. He wore a wide grin that would frequently lip-sync the words to the song he was playing. He would move between an intense focus on his mixing board and laptop, to releasing himself  from the tables and breaking into a dance.

He wrapped-up his set  wearing a mask of his own face while spinning mashups of Cypress Hill’s “Jump Around,” “Get Low”  by Ludacris, “Satisfaction” by The Rolling Stones and his classic, “Funk Soul Brother.”

AFM caught up with Cook after his performance to discuss the recent success of his new single, “Eat, Sleep, Rave, Repeat,” making music and juggling his two identities: Norman Cook the dad, and Fatboy Slim the wild  DJ. 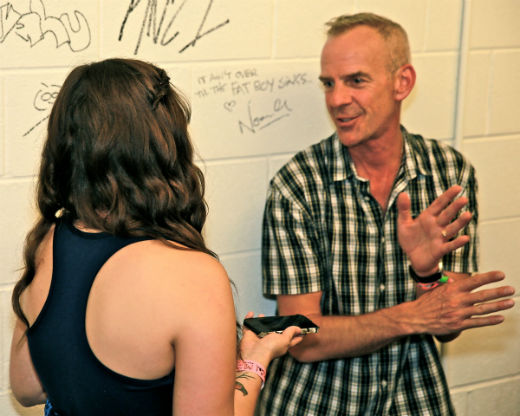 AFM: Hey! Great show! How long has it been since you’ve been here?

AFM: Really? What did you think?

Norman: It’s interesting, I actually came straight off of the plane. It’s weird kind of sort of, the whole EDM thing in America.

AFM: Yea that was something I was going to talk to you about. I mean, how is it for you? You were touring in 1999 and 2000, now you’ve come back and it’s completely different.

Norman: It’s nice. It’s lovely seeing a a new generation of kids getting into it. And it’s weird because this music was kind of invented in America 25 years ago, we took it to Europe and then me and the Chemical Brothers brought it back in the 90s, and now it’s around again. It’s lovely to see the way is cross pollinates around the world. Obviously the internet, it’s bringing us all together.

AFM: How is that? With technology? Going from the old-school system of making music to playing off of your laptop?

Norman: I’m kind of old school. it took me a while to get from vinyl to laptop.

Norman: I like it now, I’ve gotten used to it. The social media is still a bit beyond me. I’m always chasing it around. . . it’s so instant. It’s hard for a man of my age to keep up.

AFM: You update regularly though.

Norman: Well, I kind of have people do that for me (smirks). If I were left to my own devices I would be updating things three weeks later, when people would be like, “that’s been, and gone.”  It’s amazing how fast things are happening (now), ya know “Eat, Sleep, Rave, Repeat” came out a few weeks ago and people are already making their own t-shirts. 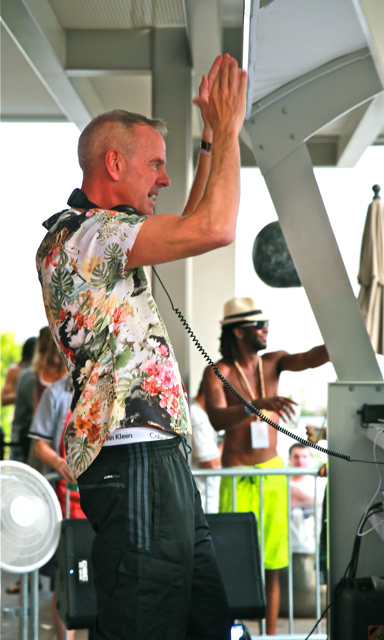 AFM: Yea, so you’re new song, “Eat, Sleep, Rave Repeat,” – I read online that you ran into some guy who was talking about a bender he had been on, and you were like “I’m going to make that a song,” Is that correct?

Norman: Yea, it’s correct. He was a crazy dude.

Norman: He was just some crazy dude we met. And again, thanks to technology you just record things you find. Then you can take it to the studio, chop it up and make a tune out of it.

AFM: How does your brain connect some crazy story you hear to wanting to turn it into a song?

AFM: Your mind  is kind of always there?

Norman: Yea, yea, you just think too, “that kind of sounds like a good slogan.” You can see it on t-shirts,  and I think it (“Eat, Sleep, Rave, Repeat”) strikes a chord with various people (smiles).

AFM: Yea, it definitely does (laughs).

Norman: Yea, I was just in Glastonbury, and at Glastonbury everyone was like (smiles)  “yea, Eat, Sleep, Rave Repeat.”

AFM: It was definitely on their level. Is your new music going to be kind of random and fun like that? What’s that going to sound like?

Norman: To be honest, on the whole, I’m mainly DJing. That was just one little thing, so ya know. With the success of it I’m surprised if I don’t get pressure to do it (make more music). The last few years I’ve been pretty happy just DJing. I haven’t really been in the studio.

AFM: So you think you probably wont be making any new music this year?

Norman: I think I’ll be brought into it because of the success of it (“Eat, Sleep, Rave, Repeat”). Ya know I feel the pressure but I don’t feel like I have to do it (make new music).

Norman: Yea. . .but then you come into this joint and the next thing you know you’ve got a record in your hands.

AFM: So,where did the name Fatboy Slim come from?

AFM: Really? You just woke up one day and were like ‘Fatboy Slim.’

Norman: I just needed another name for a different label and a  slightly different kind of music.  It’s not an oxymoron or anything like that.

AFM: So you’ve went through a lot of phases and changes in your life, where are you today as Norman Cook and Fatboy Slim.

Norman: Today I’m half a committed father of two, and the other half of my life I’m Fatboy Slim the DJ. . .

Norman: (laughs) Excellent, yes. Jumping around on stage and turning people on to me records. And like I said, at the moment that doesn’t really involve being in the studio as a producer and an artist. I’m half DJ half dad.

AFM: A bit of a double life?

Norman: Yea, it is a double life. Ten years ago the lines were blurred with where Norman ended and where Fatboy Slim begun. But now, I’ve got a grasp on that. When I’ve got the Hawaiian shirt on I’m Fatboy Slim, when I take it off, I’m Norman.

AFM: So when you change the shirt, we know?

Norman: Yea, it’s kind of like Superman, but instead stupid man (laughs).

AFM: (laughs) So, on a perfect day, you’ve got no obligations. What are you doing? Are you Norman or Fatboy Slim?

Norman: Both. I would love to get on a plane and come do this. Or I would be at home being a dad.

Photos from Maya Day and Nightclub by Steve Yap Photography