As noted in yesterdays post, the end of 2010 brings with it a fantastical review of the best and worst of the year. And of course after a long and lovely list of my favorite top ten red carpet looks yesterday, today I can’t resist sharing some of the most dreadful looks to appear on any carpet, red or otherwise this year.

When I look at some of these fashion disasters it always brings to mind a few clichés, questions and that horrible Real Housewives of New York song by the Countess – Money Can’t Buy You Class. I mean if you are rich enough to employ a stylist… find a good one that will tell you the truth about how frightening your choices are. And if you think that stylists are just for the red carpet weak, then at least read good fashion magazine’s instead of Gothic Weekly ( uh -umm Taylor Momsen).

In any case here are some of the worst fashion mishaps from the last year.

I’m not sure exactly when or how it happened but somewhere along the line Taylor Momsen decided that flashing herself in public and emulating a raccoon with her eye makeup was a good idea, but add to that the Nancy Spungen wannabee outfits and it equals a train wreck.

Then there’s KeSha, I get the whole I am such a rebellious female pop star thing but this neon splashed look is beyond trashy 80’s and best left in the MTV vault.

How about another pop sensation Nicki Minaj, I can’t exactly figure out what is going on with this ensemble. It looks like someone took a kiddie bedspread and crossed it with a Christmas ornament… obviously not a great combo.

Lady Gaga’s fashion rantings aside, Katie Perry proves to be the queen of the tacky pop stars with get ups like this one. I get that she’s cheeky and I get that she likes to seem whimsical…but come on…with killer body like hers, why does she wear things that are so ridiculous?

And if Perry is the Queen of Tacky then Courtney Love must be the reigning Queen of Confusion. Who else can take perfectly wonderful designer duds and make them look like something that she found dumpster diving? And while we are at it, do anyone else notice the sudden resemblance between her and Taylor Momsen?

Well maybe there is one other person who can make perfectly good clothes look bad, Amy Winehouse who may insist that she doesn’t want to go to rehab but believe me girlfriend needs to be put in a fashion lockdown ASAP.

It pains me oh so much to even mix in one of my favorite actresses with this dastardly bunch but if I am being honest Helena Bonham Carter just continues to employ elements from a myriad of characters she has played when she steps onto the red carpet. Perhaps if she tempered the hair or the gothic makeup to something more apropos with her outfits then it would all be a tad more palatable…but I fear that’s not the case.

Of course there is one more Brit that many American’s aren’t familiar with but Kaite Price the glam princess, tabloid darling, singer and now adult novel writer is never shy about showing off the assets that have made her famous.

And another Price often seen on the red carpet…though I have no idea why is Phoebe Price. The bit part actress and model seems to pop up everywhere and know everyone…except a good stylist or tailor that is. This creation looks like something one would make with scraps leftover from a sewing 101 class… I am speechless! 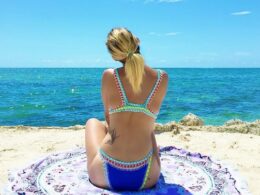 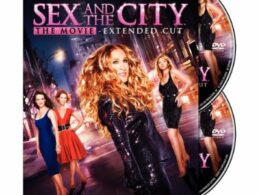 Oh it seems like it was only yesterday we were filing into the movie theater, packed like sardines,…
byMarlene 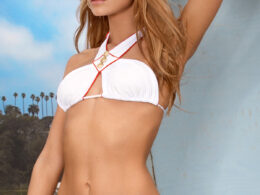 It may just be February, but for us Phoenicians that means hot temps and swimsuit season is right…
byMarlene 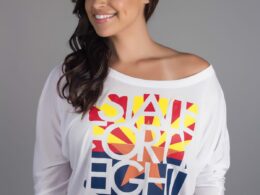 When hometown pride meets a passion for fashion, it makes for one chic ensemble. “Arizona Passion Meets Arizona…
byChristina Silvestri