The biggest day in college football is upon us. The two top teams, Auburn and Oregon, will go head to head for the BCS National Championship title on January 10, 2011. And where will this exciting event take place? The big game is headed to the University of Phoenix Stadium in Glendale, Arizona!

For those of you who are empty handed and do not have a seat at the big game, don’t worry. Phoenix has all the sports bars a football fanatic could ask for… 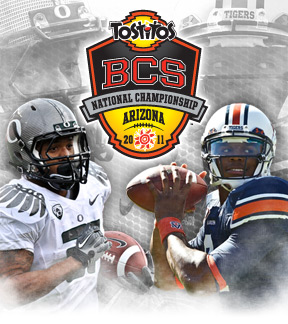 Zipps and Goldie’s Neighborhood Sports Cafe
Catch the game on H.D. flat screen TVs while playing a game of pool or shuffleboard. Each Zipps location and Goldie’s in Scottsdale also offers the same delicious homemade menu and large selection of your favorite libations.
Visit zipps-sportscafe.com for locations across the Valley.
Goldie’s: 10135 E. Via Linda, Scottsdale. 480.451.6269, goldiessportscafe.net.

Fox Sports Grill
This upscale eatery and bar has sports written all over it! Fox Sports Grill is a stylized yet casual restaurant with great contemporary American cuisine. The sports Mecca invites you to watch the game in its state-of-the-art viewing environment, where multiple plasma and large-scale projection screens broadcast a range of sports and entertainment programming daily.
16203 N. Scottsdale Road, Scottsdale, 480.368.0369, foxsportsgrill.com.