The spring runways were all about natural, effortless hair. And best of all, they’re easy peasy. Here are some of spring’s top hair trends to pair with the season’s bright color palette and raised hemlines.

“It’s about the scarf,” Guido said of the hair at Dolce & Gabbana, “like how a woman would just pin her hair up [and] put a scarf on.” He began by applying Redken Aerate 08 Bodifying Cream-Mousse to the hair and blow-drying it straight back, removing any hint of a part. He placed the scarf around the head about an inch from the hairline and tied it off-center at the nape of the neck, letting the ends skim the shoulders. He rolled the hair up as if he was going to do a French twist, instead folding the ends under to form a loop, and fanned the hair out on top of the head. “There’s a little indication of the ’60s. [There is] a little Riviera feeling,” he said.

Hairstylist Paul Hanlon wanted the disheveled buns at Marni to look “very organic [and] very real—almost like a girl has just walked into a fitting.” He began by misting on Tigi Bed Head Superstar Queen for a Day Thickening Spray and blow-drying the hair. He then created a deep side part, gently sweeping the hair against the forehead and fastening it at the nape of the neck. The ponytail was then divided in two sections, sprayed both with L’Oréal Paris Elnett Satin Hairspray, and teased them for a “slept-in texture.” He tucked one section under and wrapped the other section around the base of the ponytail. He finished the look by tugging at the knot so that it wouldn’t look “too clean.”

J. Mendel makes elegant dress-up clothes, but the hair this season was relaxed and unfussy. “They’re not barrel curls,” hairstylist Orlando Pita said of the “flat and natural-looking” waves he gave the models. He parted the hair down the middle, smoothed the front section with Phyto Professional Workable Holding Spray, and then pushed the hair behind the ears. Starting just under the ears, he ran a flatiron over one-inch sections of hair, rotating it both toward and away from the head to create soft waves.

It’s “very natural,” hairstylist Guido said of the ethereal look at Balenciaga, “but I still wanted it to feel very modern and rich.” In the front, he parted the hair simply down the middle and drew two sections back, pinning them at the crown. He then secured “twisted gold” metal hairpieces to the back of the head, right above the pinned section, to finish the style.

“It’s not polished and it’s not glamorous,” McKnight said of the sporty braid at Balmain. He got the look by roughly drying the hair and spraying it with Pantene Pro-V Classic Style Hairspray. He braided the hair and secured it with a thick black elastic, then added a second elastic at the base of the neck. To make the hair look “lived in,” he pulled out random sections around the ears. 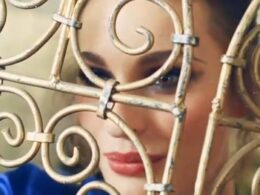 What’s a Valley Girl to do on a hot summer day? The latest means designers and brands are showcasing their collections through is film.
byChristina
1 share
0
0
1 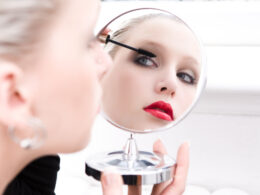 With so many products to choose from, it’s difficult to decide which products you really need.  Luckily for…
byCaitie 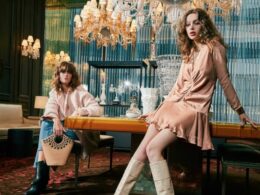 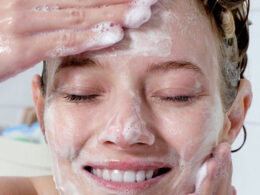 The 10 Commandments for Clear Skin

Taking care of your skin will do wonders for your health and aging aesthetics.
byChristina