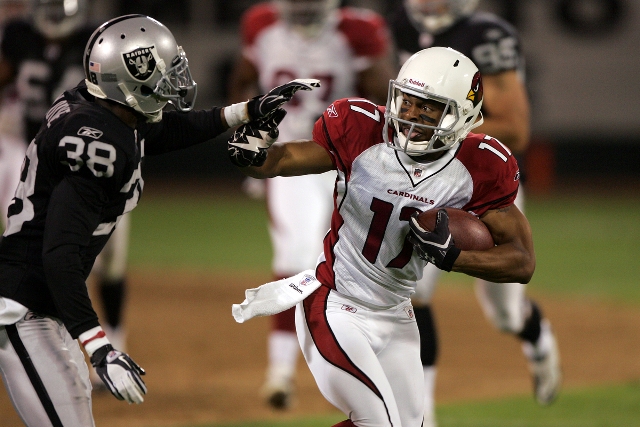 We understand that Chansi Stuckey, wide receiver for the Arizona Cardinals, knows his way around a football. But who knew this athlete was such a foodie? Stuckey was kind enough to share his favorite local restaurants with AZFoothills.com readers. Here’s what he had to say:

Breakfast: The Breakfast Club
The trick at this Scottsdale hot spot is to sit at the counter for quicker service or sit outside and enjoy the nostalgia of Old Town. If you love a good old-fashioned breakfast of eggs and bacon, the Breakfast Club will not let you down. The large, fluffy omelets are my choice when I visit, filled with spinach, avocado and pepper jack cheese. The juices seem to be made-to-order as the taste solidifies its reputation. Service is quick and efficient and the waiters are very helpful for first-timers.

Brunch: T. Cook’s
Nestled inside the Royal Palms Hotel, coupled with a guitarist playing and being kid-friendly, this place is great after sleeping in or after church. With a Mediterranean flare, the buffet is my choice, although there is an a la carte menu available with everything as well, which comes full of fresh cheeses, salted meats and fresh mozzarella with tomato and basil. The seafood is what send T. Cook’s over the top. The buffet is filled with fresh crab legs, lobster, oysters, ceviche and shrimp. The omelet station is also a great addition.

Lunch: The Green House
Conveniently located in Kierland Commons, The Green House immediately became a favorite of mine. As an appetizer, the smoked salmon bruschetta is amazingly fresh and easy to eat. If one gets the urge to splurge, the white truffle Parmesan and chive fries are in a league of their own. They are bursting with flavor and the plate is large enough to be shared with a friend. For the main course, the crispy half chicken is just that. Crispy enough on the edges to distract you from the transition into the tender, juicy heart of the chicken. Paired with a sweet potato hash, the portions are just enough to warrant another visit.

Dinner: Mastro’s City Hall
A classic if there ever is one. The atmosphere here is very laid-back. Most the nights the crowd is dressed to impress. The list could go on and on with what to order here but the premier choices here start with the Mastro’s seafood tower. Unless there is a shellfish allergy in the bunch, this should be enjoyed by even the novice of seafood eaters. Complete with every shellfish you can imagine, including a dash of oysters, the presentation what grabs you first. It’s just what it says it is, a tower! Secondly, I recommend the beefsteak mozzarella and tomato salad or the creamy, thick lobster bisque soup. I have seen the lobster bisque enjoyed by those who are not soup lovers because of the hearty chunks of lobster hovering at the base of the soup. The bone-in rib eye is the king of the illustrious list of prime aged beef. Whether it’s a slow Tuesday evening or an electric Saturday night, the taste is consistent throughout. Both tender and juicy, it defends its title night in and night out. With not only the title of best steak in town, I would have to give City Hall the title of best dessert in town as well. Mastro’s butter cake is warm and oozing with a rich taste of sweetness that is second to none. Coming directly from the oven to your table, you are sure to have everyone asking you “what is that called?”

Late Night Dinner: Sushi Roku
One would think that having a restaurant inside one of Scottsdale’s premier hotels would be too crowded to enjoy a nice late dinner. It’s just the opposite. This is a great place to have a date or just to hang out with the friends. The atmosphere will cater to both. My starter of choice is the seaweed salad. Fresh and it has not been sitting out over night. After the starter, it’s pretty safe to try anything on the menu as everything has a great taste. The preferred roll here is the baked crab roll. Unlike a lot of restaurants, Sushi Roku uses all fresh fish including the crab and lobster. The sushi chefs do an awesome job. A little hint, they will make any kind of roll you ask them even if its not on the menu.