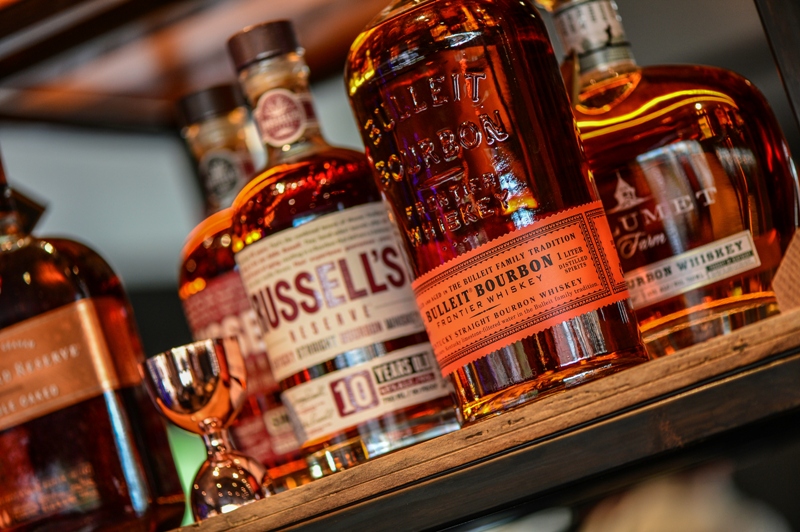 Looking to up your bourbon knowledge? Look no further: Christopher Marshburn, sommelier and general manager at Bourbon & Bones, takes us through Bourbon 101, from his personal faves to serving tips to gift ideas. (Bourbon & Bones’ extensive high-end spirits list has more than 120 bourbons!)

What is the difference between bourbon, whiskey and scotch?

Bourbon is a true American spirit and has a few rules regarding its distillation. It must be made in America, be made of at least 51 percent corn and aged in new charred American oak barrels and contain no additives to change color or sweetness. Whiskey itself can be made with a variation of these rules whether it be less corn, used barrels, or made in Canada or Ireland. It’s the theory that all bourbon is technically whiskey, but not all whiskey is bourbon. Scotch is made in Scotland and generally made of malted barley (hence single malt)

What is a good starter bourbon?

That question is a little more tricky. If by starter you mean smooth or easy to drink, I like to recommend something like a Larceny bourbon. It’s readily available, and has a sweeter wheat characteristic than many bourbons that incorporate rye as a blending grain. However one of my favorites for beginners is a bourbon finished in used wine barrels. Again since the bourbon has been in new American oak and transferred to wine barrels before release, it is still technically a bourbon, but these ‘finished’ bourbons tend to be a bit fruitier and have even less of a ‘bite’ than many traditional bourbons.

What is a good bourbon to gift?

Everyone will say anything from the allocated Pappy Van Winkle line is a great gift, but those are nearly impossible to find. Since bourbon preferences change person to person it’s hard to nail down one. Instead, I like to give unique whiskey glasses or ice molds. For a bourbon drinker, those are just as thoughtful as the bottles themselves, or find their favorite brand and see if they make a different edition to keep things new.

How to taste new bourbon:

I like to taste new bourbon neat without ice or water. Nose the glass to get what smell characteristics you can and then sip. Let the whiskey flow over every part of your mouth (the Kentucky chew) then swallow down. Never judge until your second sip so your mouth is used to the alcohol and see what you think.

What is best way to serve bourbon?

Bourbon should be drank however you like to drink it! If you like it neat and untouched, so be it. If you like it to mellow with ice cubes, feel free. I like to add an ice ball so the bourbon is slightly chilled but not watered down, but to each drinker the best way to drink is however you prefer it is your drink in the end.

I love many different bourbons for many different reasons. My favorites may be your least liked it’s all personal preference. However. if I can have a pour of George T Stagg or Parker’s Heritage, I wouldn’t complain one bit.

Answer: I don’t know if I like the word mixers as it makes me think of sodas, which is fine if you prefer. I personally prefer cocktails like a good Manhattan or Old Fashioned if I am ‘mixing’ bourbon. The smoked Michter’s Yye Manhattan at Bourbon and Bones is my personal favorite as far as cocktails go.

How long and by what method should bourbon be kept?

This is a question that doesn’t have a definitive answer. In theory, it should be kept in a cool dark place like a liquor cabinet out of the sun. If opened, the alcohol can dissipate and lose characteristics but this may not happen for many years and some bourbons tend to even out and become less abrasive after being open for a period of time. The key is just drink it; bourbon is meant to be enjoyed by drinking not just by looking at the pretty bottles.