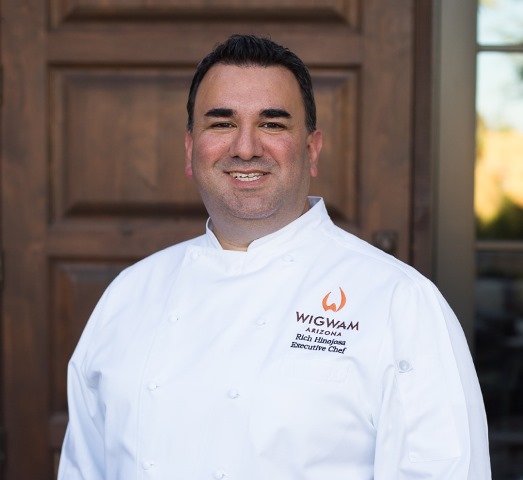 Restaurant and location: Litchfield’s, Red’s Bar and Grill, Wigwam bar, all at the Wigwam Arizona Resort and Spa

What inspired you to take part in the Taste of the NFL’s Kick Hunger Challenge “Flavors of the Valley” competition? Being a chef, food is a huge part of my life, and always has been. Any small part that I can play in helping feed the hungry, I am happy to do. I thought by teaming up with one of the most recognizable brands in the world, NFL, we would be able to make a much bigger impact. Every little bit helps. When I was a kid, my mother had made an arrangement with our neighborhood HEB store manager that one day per week we could have all of their day old breads, Danish, donuts, pies, buns, etc… Every Monday we would load up our station wagon all the way to the top and deliver it to the Our Lady of Guadalupe parish on the west side of San Antonio so neighborhood families could come get breads from the church. It is crazy to think that in 2013 there were over 33 million Americans living in food insecure households, half of those being children. Every little bit helps.

Any hints as to what you’ll be dishing up at the Taste of the NFL’s Party with a Purpose if you win? Litchield’s is named after the founder of our community and our menu is focused on a farm to table and we source local product. If we have the honor to participate, I will get together with Litchfield’s chef de cuisine Chris Knouse and we will come up with something that highlights local ingredients and well represents the Wigwam!

Say you’re hosting a Super Bowl party. What dish do you serve to guests? Being such a big football fan, when I have people over to watch the big game, I want to enjoy it too. So, I cook things that can go all night and be ready to go for kickoff. I usually make a pork posole (braised pork and hominy soup), fresh tortillas, lime, onion, jalapeno and cilantro. Being from Texas, I love BBQ, so I would normally smoke some brisket or tri tip as well, with this we can whip up some smoked beef and green chile nachos.

Have you always had a passion for the culinary arts? How did you get your start? I have had an affinity for good food since I was very young. I started enjoy oysters and clams at 2 or 3 years old, for my 7th birthday dinner I asked my mom to roast me a whole duck. I was lucky to have some great cooks in my family; my mother is a great cook, as well as a few of my aunts. I learned a few things as a kid, but one of my aunts took me on a cruise as a 19 year old, I met the chef and sat in on a cooking demonstration, I thought it was one of the coolest things I had seen. That night I had coq au vin for dinner on board, it blew my mind. When I got back home, I started calling around to culinary schools.

What do you love most about what you do? I love that every time someone comes in to dine, I get to be a small part of that person’s life for an hour or two. I love the instant gratification that we get as chefs, we can look across a dining room and know immediately how our food is received, we get to see the oohs, the aahs and the OMGs. It is very fulfilling.

And a few fun faves…
Favorite Super Bowl memory: Watching Super Bowl 27, the Cowboys had finally made it back to the Super Bowl, and just destroyed the Bills. I think the Cowboys caused nine turnovers in that game!
Favorite sports-watching snack: Really good pizza!
Favorite cocktail to whip up for Super Bowl guests: Chilled shots of tequila with a drop of lime and a drop of agave.

Pass The Pinot – Litchfield’s Kick Hunger Challenge, a special pairings party will be held on Sunday, Dec. 7 – 5:30 to 9 p.m. in the Wigwam Ballroom. Tickets are only available for pre-sale and can be purchased at www.wigwamarizona.com.