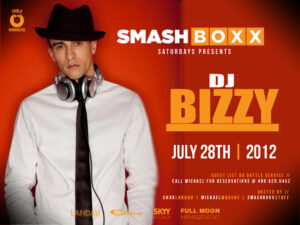 DJ BIZZY has performed at a wide variety of Hollywood events including the premiere parties for Misson Impossible Ghost Protocol, Michael Jackson’s This Is It, The Book of Eli, Benjamin Button, GI JOE: Rise of the Cobra, Transformers: Revenge of The Fallen, Social Network (Golden Globe Party), and Up In The Air. Amongst others…

Bizzy said:
“Music is a tool that can be used to bring people together from all walks of life” and “Even if you don’t speak the same language as someone else, you still hear the same beat!”