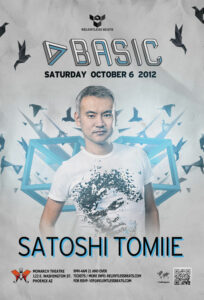 In 2000, Satoshi Tomiie launched his own label “SAW.RECORDINGS”. It was Satoshi’s desire to create a platform from which he would be able to showcase ideas and creativity that are more experimental. SAW’s first single release “Paranoize” by Bipath (A collaboration work with Stephane K.) caused major excitement from DJ’s worldwide. If SAW.RECORDINGS is an example of the direction that Satoshi is heading in, he is acknowledging the changes in the dance music scene, thus shifting what House music is. House music never stops evolving and expanding its borders and Satoshi Tomiie is in the forefront of this movement.