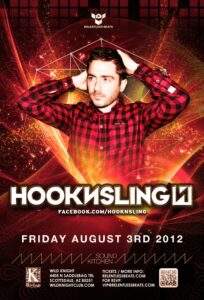 What do Swedish House Mafia, Tiësto, Guetta, Kaskade, Oakenfold & Morillo have in common? They all love private jets and Hook N Sling.

There is no denying that the eyes and ears of the world’s dance music fraternity are focussed firmly on Hook N Sling in 2012. In just a few short years the man has gone from aspiring disc jockey to in-demand DJ, remixer and producer property.

Hook’s formative years saw him chalk up some impressive feats, in 2007 scoring an ARIA nomination, a DMC Buzz Chart #1 and several Pete Tong plays for his breakout tune “The Bump”, and later straddling both club and commercial radio success with “The Best Thing” and “Gotta Make A Move”. Add to that a swag of head-turning remixes for Calvin Harris, Fedde Le Grand, Miike Snow, Miami Horror and Ou Est Le Swimming Pool, the acclaim of mixing the Ministry of Sound Annual in 2010, and rocking gigs such as Pacha, Space Ibiza, Global Gathering and Future Music Festival, the early warnings of his impending ascent were clear.