Home How-to's How to Organize Your Makeup
ShareTweet

You’ve heard me say I’m a beauty junkie. And that I have a crapload of makeup. But when I decided to attack my office/vanity room on a cleaning spree this week, I really got an up-close idea of what A LOT means. And boy is it scary…. 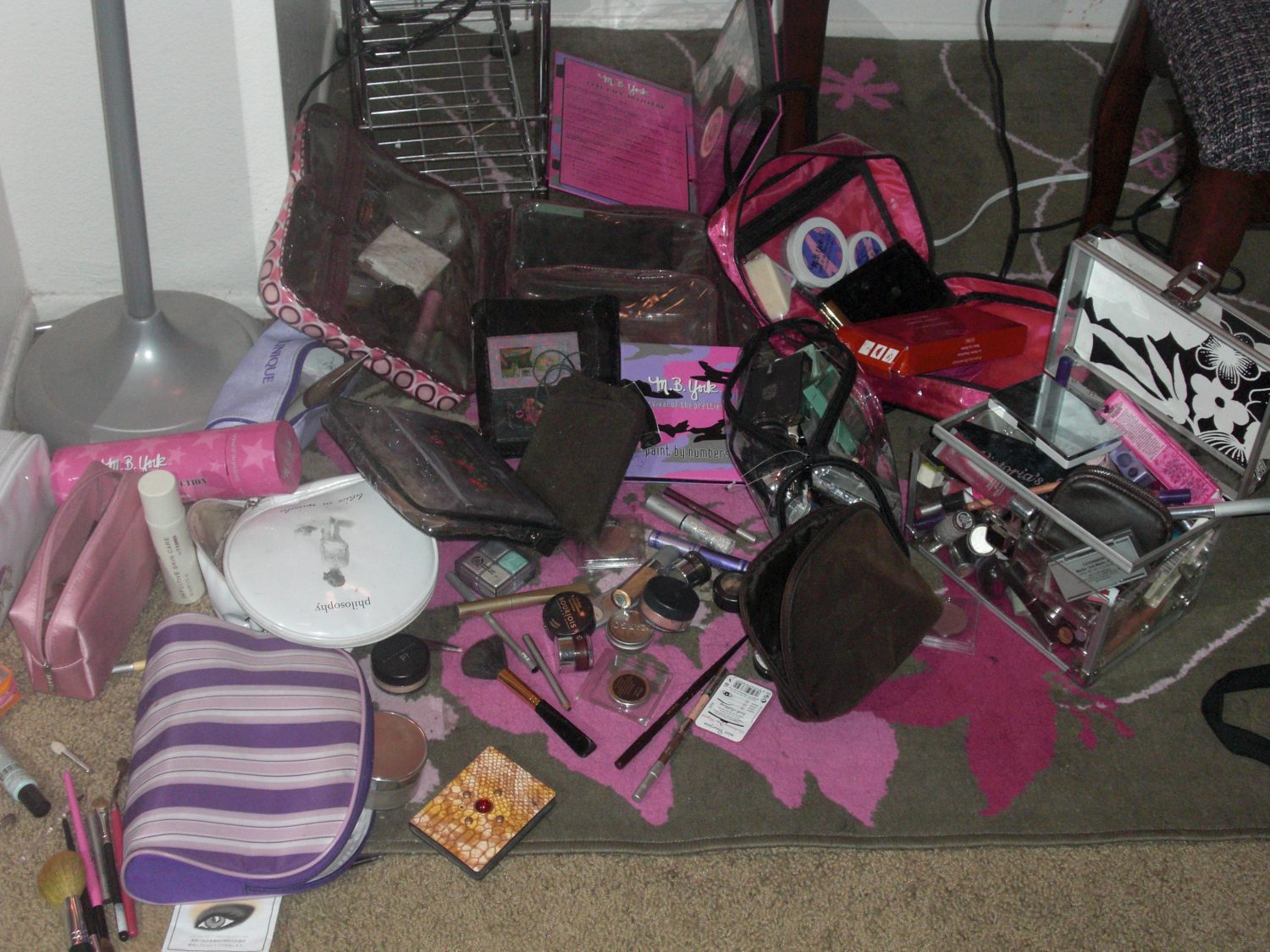 That’s about 14 makeup bags, each full of makeup. Seven of them alone are likely just eye shadows. There’s about five or more bags that probably contain nothing but eye makeup and that clear case on the right that no longer closes is literally unhinged because of a lip gloss overflow. (And in my defense, only about half of this left strewn about like this.)

This doesn’t include the baskets of skincare and beauty products or hair products either. But hey, when you work in beauty editorial you end up sampling a lot of stuff!

Needless to say, some organization was needed. When you’re confronted with chaos like this, here’s how to attack it:

Throw out the old

People hold on to their makeup way past their expiration dates and yes, makeup does expire and if you use it too long it’s bad for you! Mascara has the lifetime of about 3-6 months though personally, I like to change mine out every month because I like it nice and gooey. For foundations it’s about 6 months. (Note: if you went on vacation and turned your a/c off only to find your foundation’s consistency all wrong, pop it in the fridge for a quick fix.) I lose my eyeliner about once a week so that’s how often I replace mine. If you’re not as likely to misplace it you can toss it after 6 months to a year. Loose powders and blushes can last two years; lipsticks and lip glosses keep for a year.

O.K. If you did what’s recommended above, I’m quite sure you’ve just cut your makeup stash in half. Which means now it’s time to find an organizational system that works for you. Personally, I like big clear makeup bags or cases so I can see what I’m looking for without having to dump an entire bag out. I also separate makeup by face stuff (powders, concealers, foundations), eye makeup, blushes and lip stuff. I also have an “everyday”  bag with the items I tend to use most often. Which, to be honest, is pretty much the only bag I touch out of the 15 or so on the floor until the weekend.

If you have makeup brushes, these should be sorted too. And again, it’s totally about what works for you. I’m totally obsessed with makeup brushes so collect as many as possible. I have the ones I use daily set out and the rest I’ve used pencil holders, pretty jars and tins to keep them in so that they’re within arm’s reach. I also have a stash in my vanity drawer. Silverware dividers are another cool alternative. 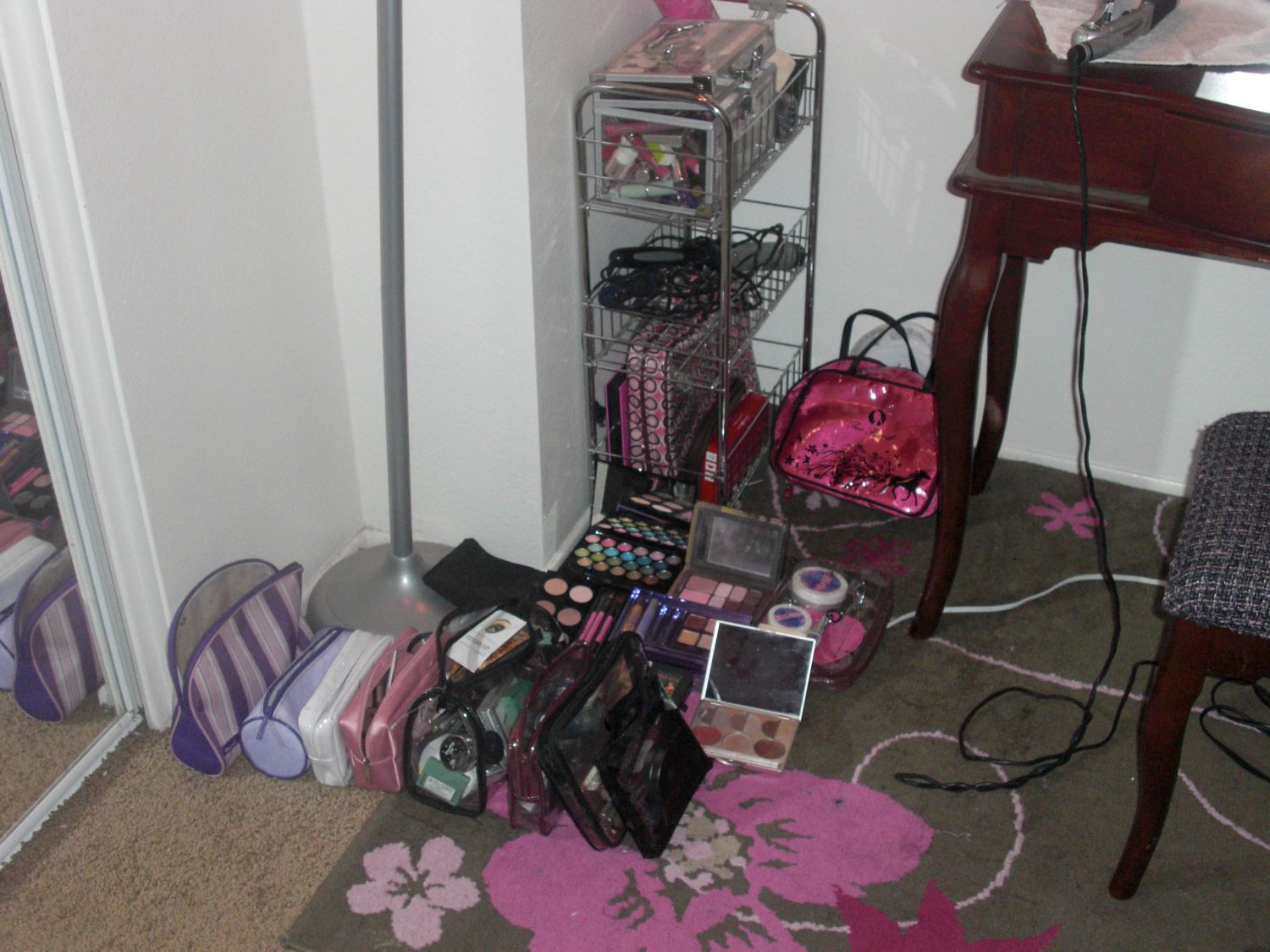 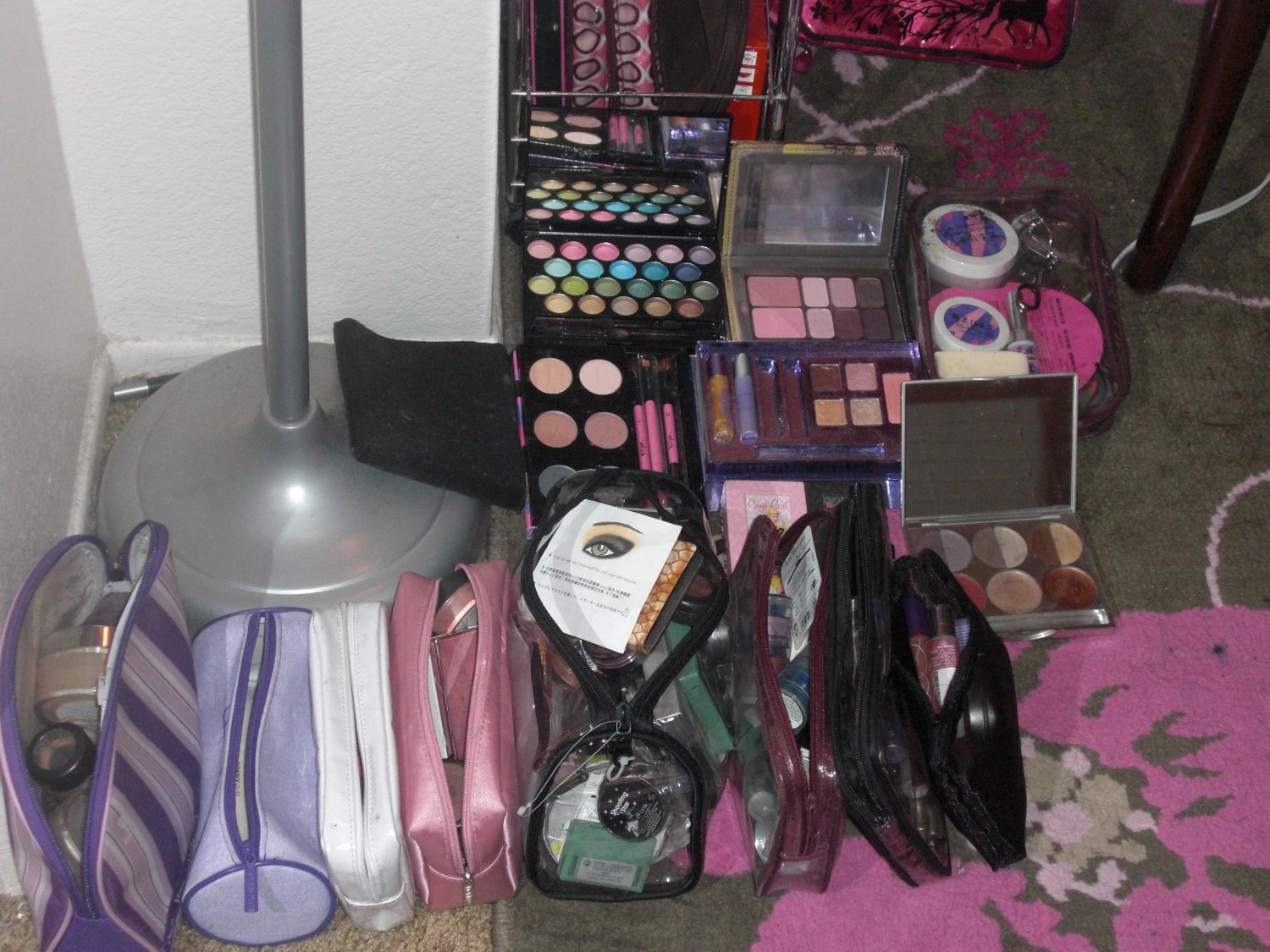 So after this blog post, I attacked my own mess. I stored stuff I don’t use often in the back and in the rolly cart and decided to keep my makeup palettes open to see if having them  visually accessible would remind me to actually use them! Eight bags of most used stuff from left to right: Face makeup, moisturizers, daily brushes, blush, eye makeup, more eye makeup, eye liner and daily lip stuff, which, by the way, almost cleared up enough space in the clear lip gloss case in the back to actually close it, yay!