Home Beauty Buzz IPL PhotoFacial – The Good, The Bad and The Ugly
ShareTweet

There are several skin care treatment these days that promise younger smoother skin and a few that are touted as the “Gold Standard” by Doctors for achieving the desired results. Even many that are approved by the FDA as being safe and effective from the IPL (intense pulsed light) Photo Facial to fillers such as Botox cosmetic should be entered into with discretion. I know many women and men that have used these treatments with great results, but some have had lesser talked about adverse reactions that have only worsened the problems. I personally have experienced the latter and want to share my experiences with you as a cautionary tale for anyone considering this treatment. This is the first in a series about my own issues with the IPL laser treatments.

The IPL photo facial can treat a variety of skin conditions such as hyperpigmentation (brown spots), sun damage, broken capillaries, spider veins, and facial redness. An IPL is non-ablative and emits a high intensity broad band blast of light at very high energy levels through a hand-held device. It delivers to the deeper part of the dermis while the epidermis layer or surface layer is untouched. The treatment takes on average 20-30 minutes with no real downtime. Some IPLs have cooling devices, but it can still be uncomfortable, or even painful depending on your tolerance level. The average treatment costs $300-$500 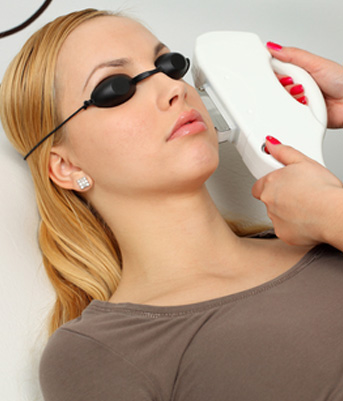 I had tried treatments in 2006 with good results so in 2010 just prior to closing my skin care spa I noticed a few new areas of hyperpigmentation showing up on my face. I realized that these areas were probably popping up due to a peel that I had recently had at the Dermatologists office. At the time they weren’t dire just annoying, especially because I took such good care of my skin … But within a month or so they were looking a bit darker so I decide to have a few IPL (intense -pulsed light) photo facials to see if it would help. I asked a few professionals I knew for referrals but ultimately I returned to the very reputable establishment that had previously treated me, if for no other reason than familiarity and because I liked the owner.

As the first zap of the laser ( much like the feeling of a rubber band) touched down on my skin over and over I remembered how intense the feeling was, but I was comforted by the provider that this would help encourage the collagen production in my skin and zap those dark patches.

Example of the average results from an IPL

When the treatment was finished all I could think about was the hot feeling in my face as if I had received a major sunburn, but I was eager for the results that I would experience as my face healed. I was given a cooling ice pack to help combat the hot feeling in my face and scheduled my next appointment knowing that for the IPL treatments to be really successful I would need a series of three to five. Once at home I examined the state of my very warm skin…. This time the dark patches had “crisped” up ( my nickname for the scab like patches that appear after your spots have been zapped) with such intensity that I was a tad taken aback. I now realize the I was probably burned in the first treatment and applying cooling packs for more than just a few minutes was not a good idea.

Within days the spots naturally exfoliated off and my skin looked great… But within a week or two there seemed to be a whole new crop of pigmentation on my face that the laser brought forth. I mentioned this in detail at my second appointment and was told in a cheerful but dismissive manner that the laser was doing its job and not to worry. Afterwards the “crisped” areas seemed to multiply… And this time I was really concerned. Being in the skin care business I know enough about the subject to know the potential dangers and I know how pigmentation can be exacerbated. 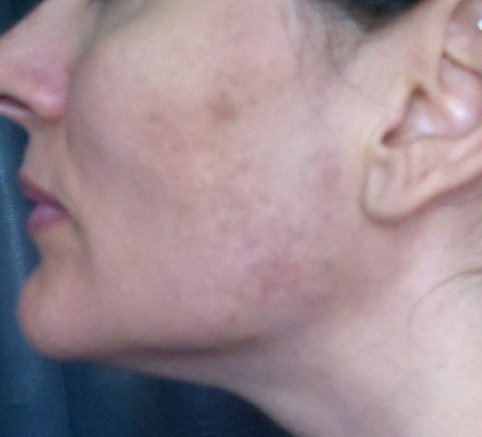 Within a week post treatment once I realized that I now had even more pigmentation I called the office to voice my concerns and questions – Was the thermal heat from the laser creating more pigmentation and multiplying the original problem? Or could it be that the temperature might have been a bit too much for me? Unfortunately my concerns were eschewed away and even responded to in a manner as if to say that I was being silly… Remember, I have been in the skin care business for a while myself so I am not your average consumer. I was again told more treatments were necessary to achieve the desired result.

Even after a discussion with one of the owners, I was told that my concerns of the thermal heat from the laser causing dermal scarring was something “they had never even heard of”. At this point there was a cautionary voice in the back of my mind, a red light if you will that I should have listened to, but because I didn’t want my face to look like this forever I reconsidered, rationalizing that if they said one more treatment was really going to help then I would give it a try just one more time. I should have known better.

Stop by on Thursday to read more of my personal story in this blog.