From hearty helpings of turkey and gravy to spoonfuls of cranberry sauce, the average Thanksgiving meal will set you back 3,000 calories. According to Robert Davis, Ph.D., author of Coffee Is Good For You,  a lot of our classic Thanksgiving nutrition advice is steeped in misinformation. Read on to find out why if turkey really makes you tired and why you should have canned pumpkin instead of fresh at your Thanksgiving table.

Myth: Turkey makes you tired.
Truth: As theory goes, tryptophan, an amino acid, is converted in the body to serotonin and then converted into melatonin, which affects the body’s sleep cycles. But the truth is, according to Davis, other foods, such as cheese, eggs and other kinds of meat, contain just as much if not more of the amino acid. The most likely culprit for the sleepiness is the amount of carbs (and alcohol) we consume at Thanksgiving dinner, he says.

Myth: A multigrain roll is the healthier option [than white bread].

Truth: Just because it’s a brown roll doesn’t mean it’s healthy. Davis explains that “multigrain” just means that there are multiple grains, which could potentially include a variety of refined grains (the white kind) and none of the heart-healthy whole grains. “Multigrain rolls might not be any better than white enriched rolls,” Davis says. When shopping for your Thanksgiving feast, Davis says the first word on the ingredient list should be “whole.” Look for labeling that says whole grain or whole wheat — but not “made with whole grain,” which could still leave room for refined grains.

Truth: Nutritionally, sweet potatoes win, boasting more fiber and vitamins A and C than their white counterparts. But preparation matters: two scoops of sugary, candied sweet potatoes are not the nutritional equal of a plain, baked white potato.

Truth:  Technically, white meat is the healthier option — with about 158 calories and 0.5 g of saturated fat per four-ounce serving, according to Davis — however, dark meat isn’t necessarily unhealthy, especially compared to other types of meat, such as red. At 183 calories and 1.6 g of saturated fat per serving (without skin), you can satisfy your craving. Darker meat also contains more zinc and iron, to boot.

Myth: Pigging out just once isn’t a big deal.

Truth: The harsh truth is, one unhealthy meal can do damage, and research has shown it, linking a single high-fat meal to impaired vascular function. Slow down, enjoy each bite and focus on portion sizes.


Myth: Pop-up timers are a good judge of when the turkey is done.

Truth: Pop-up timers might be convenient — but they’re not always reliable, Davis cautions, which can become a food safety problem. “People should also use a conventional food thermometer, placing it in the innermost part of the wing and thigh and thickest part of the breast to ensure that the turkey is cooked to at least 165 degrees F all over,” he says.

Myth: Red wine is the only healthy wine to toast with.

Truth:  Because canned pumpkin is more concentrated than fresh, it has two to three times more fiber and vitamin A, according to Davis (one note of caution: being more concentrated also means it contains more calories). “The canned is just as good to use if not better,” he says. 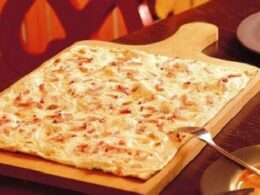 Okay I’m about to do something I rarely do… get a little personal. When I was a little…
byJackie 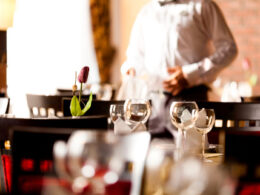 Finding the perfect presents for friends and family can sure work up an appetite. Whether you’re craving a…
byKarah Van Kammen 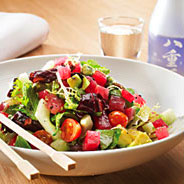 Hungry girls, set your sights and your appetites on the 27th Annual Noche de Gourmet on Oct. 16…
byJackie