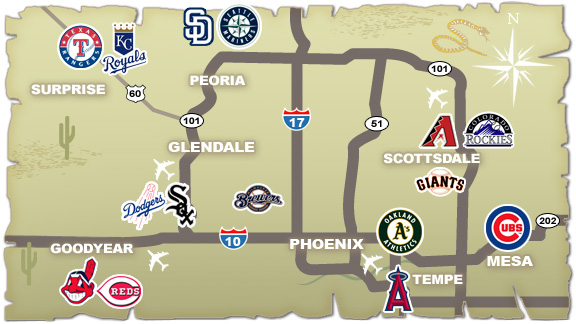 In town for Spring Training? Live in town but roaming around the Valley after watching your favorite team? Cool off after the game while investing time into a little retail therapy at some of Arizona’s shopping hot spots. We’ve put together a little list of the best places with the most retail stores for you to visit during Spring Training.

Scottsdale Fashion Square Mall: With over 250 stores, Fashion Square is a top shopping destination in Arizona. Known for it’s upscale luxury stores, Fashion Square accurately represents the city of Scottsdale and all it has to offer. There are a slew of designer shops such as Gucci, Prada, Louis Vuitton, and Burberry along with many unique boutiques that you can’t find anywhere else. The mall also has major department stores like Nordstrom, Barney’s, and Macy’s. Shopping options extend outside the mall as well at Scottsdale Waterfront and into Old Town Scottsdale. Tons of western shops and luxury boutiques sprinkle the streets of Old Town, which is a step away from the mall.

Scottsdale Quarter/Kierland Commons: Another premier shopping destination that lies in North Scottsdale. On the east side of Scottsdale Road is the Scottsdale Quarter, an outdoor shopping mall with upscale stores such as Nike, The Apple Store, Urban Outfitters, Free People, and Pottery Barn. The area tends to feel like a mini city with high buildings and narrow streets running through it. On the west side of the road is Kierland Commons, another outdoor shopping center with a variety of boutiques, home stores, and luxury goods. Stores such as Crate & Barrel, J. Crew, Michael Kors, Tommy Bahama, and Victoria’s Secret are among them.

Tempe Marketplace: An outdoor shopping destination common among all Tempe residents including ASU students is Tempe Marketplace. The shopping center has quite the variety to offer. Harkins Theatres sits at the west end of a stretch of shops including Victoria’s Secret, Gap, and Barnes & Nobles. The outskirts of the mall include shops such as Target, DSW, BestBuy, Petsmart, and Nordstrom Rack. The mall focuses on the outdoor environment, often offering free concerts and lighting up at night, providing an exciting environment. Shopping before the game? Jump on the free trolley near Dave & Buster’s and ride on over to Sloan Park.

Mesa Riverview: Another outdoor shopping center filled with national retail stores is Mesa Riverview. Stores like Walmart, PetCo, Home Depot, and Office Max are amongst the larger destinations. Bass Pro Shops Outdoor World is a unique feature to this area, offering up endless amounts of outdoor gear and supplies. Just like Tempe Marketplace, there will be a free trolley in operation ready to take you to Sloan Park. Pick up is every 20 minutes behind Matta’s pick up window.

Arrowhead Towne Center: One of the top malls on the west side of Phoenix, Arrowhead Towne Center has a large selection of national retail shops. Macy’s, Sears, Express, Aldo, and Dillard’s to name a few. Dick’s Sporting Goods, Forever 21, and AMC Theatres also join the list as some major shops.