Previews already hinted at it, but after last night’s “Men Tell All” Bachelorette reunion show where recently sent-home Reid was a no-show (along with the hated Wes who probably didn’t want to be publicly scorned and ridiculed), it’s becoming more and more clear what “unexpected confession” in next week’s season finale would make Bachelorette Jillian “question everything.”

Last week on ABC’s “The Bachelorette”, Jillian shocked us as she sent home Realtor Reid because of his hesitance to exclaim serious plans for their future and vocalize his feelings. She did however, choose hot and cold Ed, who is very vocal, maybe even a little too vocal about his affections for Jillian, along with dreamy, almost “too perfect” Kiptyn for next week’s finale show.

After the cameras showed Jillian crying by herself on a bench after sending him home, Reid confessed in his good bye interview that he “was definitely falling in love with [Jillian]” and that it’s “[his] fault” for being “slow and not opening up fast enough.”

But that wasn’t the only reason the “Men Tell All” reunion show was juicy. Feet-freak Tanner P. confessed that he was the one who told Jillian about one of the guys (Wes) having a girlfriend. Apparently when he and Wes were commiserating about sharing a room with a bunch of smelly guys, Wes told him, “I’ve got a girl back home. I don’t need this.” Angry bachelor Dave then defended Wes by saying “Everybody’s got a girl back home.” After an uproar from the audience, Dave quickly added, “Ex!”

Dave also gave Jake (Mr. nice guy pilot) a piece of his mind for going back on the show to tell Jillian Wes was the one with the rumored girlfriend. He said “you cried like a little girl.” The rest of the guys speculated as to whether Jake was in violation of the “man code” by going back. 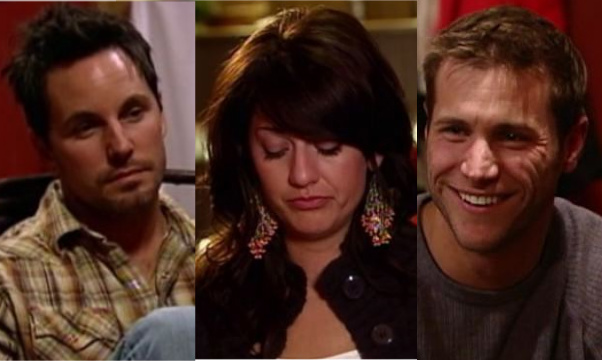 Jake was also criticized last night for trying to be so perfect all the time on the show. But he stood by his actions and when asked if he still had feelings for Jillian, he gave a typical Jake response and said “I always will” and that in some ways he’s “still getting on [his] feet.” He was also asked if he would switch positions and star on the next season of “The Bachelor.” He hesitated for a moment and said it was still too soon, and he would have to decide when the time is right, but it would be an honor.

Another bachelor was also condemned for not following the “man code.” Juan, who seemed to be disliked by most of the other bachelors, was in violation because he kept to himself and then pretended to be one of the guys when the cameras were on.

Even though the infamous Wes did not show up to the reunion, they still played a rather long video of classic Wes moments from the show. Wes, who confessed to having a girlfriend and for coming on the show to promote his music, has claimed to reporters that his comments were taken out of context. No one sees how the could be, but the show must go on right?

Since people are still buzzing about the dramatic last season of “The Bachelor,” where Jason dumped his fiancé Melissa for runner-up Molly on national television, guess who decided to grace “Men Tell All”? That’s right, Jason and Molly hit the stage, which granted them a surprising applause from the audience. Molly responded by describing the negative response they would get when they first got together and how they were “absolutely ripped to shreds in the media and tabloids and on the Internet.” But Jason added that the harsh negativity only brought them closer together.

The couple also added that they have been seeing each other only on weekends, since she has not yet moved from Milwaukee to Seattle and that “there will be a wedding.”

As for what he did to Melissa, he said she is happy now, so he’s willing to take responsibility for that.

***See who Julian picks at next week’s season finale scheduled for Monday at 7/8 p.m. central time on ABC!