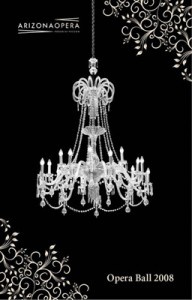 On Saturday, May 3, the Phoenix League of Arizona Opera presented their 9th Annual Opera Ball, La Traviata. The black-tie gala, hosted at the Arizona Biltmore, is the biggest fundraiser of the year for Arizona Opera.

Elegantly fashioned in a Parisian-inspired style complete with luxurious linens and exotic flower displays, the décor wowed guests (all fittingly dressed to the nines, of course). During the four-course meal, the entertainment gave attendees a taste of the upcoming Arizona Opera season, opening in October with Verdi’s “Rigoletto.” This sneak preview featured a cadenced, goose bump-producing solo from “Rigoletto” performed by Lisette Oropesa, which literally sparked a standing ovation.

So, get in line for tickets to the 2008-2009 Arizona Opera season. And of course, don’t miss next year’s Opera Ball—it’s sure to bring down the house. Again.