Every February more than 50,000 people worldwide flock to Tucson for the annual Gem and Mineral Show where an array fossils, gems, jewelry and art are on display to buy and trade. The Gem & Jam Festival, now in its 11th year, fits seamlessly  in the Southwest city’s signature show. In 2017 the festival will be moving from its downtown urban venue to the beautiful, desert setting of Pima County Fairgrounds.

The just announced lineup is expected to grow even more, hosting over 50 musicians across 3 stages, plus special late night sets, gem and mineral exhibits, art galleries, painters, dancers, daytime workshops, and much more. “It is exciting to be able to showcase a lineup as dynamic as what we are bringing to Gem & Jam 2017,” says festival co-producer Josh Pollack. “Couple this with our new venue, which now allows us to be a true camping festival and you have the recipe for the best Gem & Jam yet.”

Located on 640 acres and just 20 miles south of downtown Tucson, the Pima County Fairgrounds is surrounded by nature and resides in a desert environment, creating an expansive setting perfect for Gem & Jam. The festival will be offering camping options for the first time, including: onsite RV camping with hookups, boutique camping, car camping and walk-in camping. In addition to this new element, Gem & Jam will be expanding on its experience with world-class visuals, unique stage designs, artist galleries, live paintings, experiential installations, daytime workshops, gem and mineral vendors and much more. 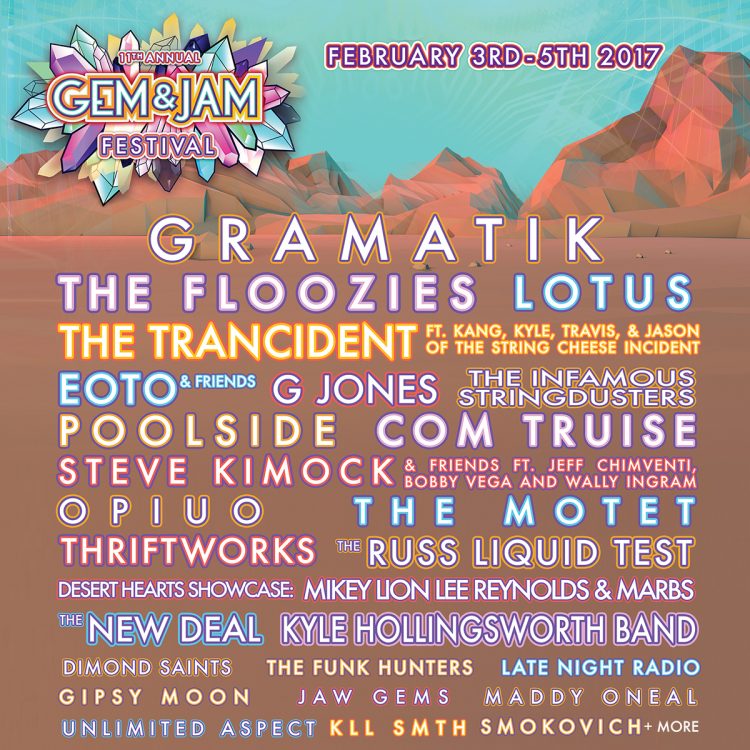