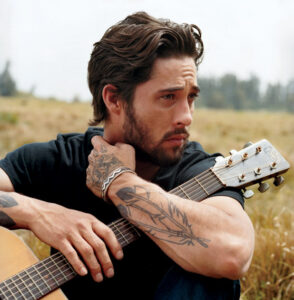 Even I thought it was an early morning itinerary when musician Ryan Bingham agreed to an 8:30am interview to talk about his recent tour and lone legend status, but I went with it. I assumed late night performing would make anyone want to sleep in. We both laughed and discussed that coffee is the number one staple in his diet.

Lets get into the chat:

BW: So, I just watched your Amazon sponsored live stream from the Texas concert at Whitewater Amphitheater a few days ago and it was incredible. Is that the first time you’ve been able to do something like that?

RB: Yes, on that scale, absolutely. The opportunity just sort of came up and we ran with it. We’ve never had a full scale set and production like that so it was a lot of fun.

BW: In the comment feed, fans were so impressed they are hoping they will end up seeing the show released as a live DVD/Album, is that the plan?

RB: I think so. We’ve always wanted to do that and this was the perfect setting. We got a lot of great footage and anything we are missing, we’ll go back in and add later from other shows, but we’re set to compile and release it.

BW: A few people felt honest enough to share their opinions, let me give you a couple of examples. “Ryan Bingham is the reason I don’t listen to Nashville Radio”, “Ryan is the most authentic musician to come around in a long time”. What do you think when you hear those comments?

RB: Ah, I try not to worry about it. Of course it’s flattering to hear people talk like that and I’m grateful, but I just try to keep my head down and keep playing for the folks that want to listen.

BW: You’ve mentioned before that touring inspires your writing. Is there anything from this tour you’ve found as inspiration that we can expect to see in something you write down the line?

RB: Definitely. When you’re on tour, you’re exposed to so much so fast: everything that’s happening socially, the food, the languages, everything is in real time, not just in the news. I try not to write too much on the road, I want to experience it first hand and soak it in. I like to observe, listen, watch.

BW: What line of lyrics from one of your songs do you feel like still gets you every time? Something that has a special place for you.

RB: That’s a hard one. (Long pause and a Texas chuckle) There’s a song that’s one of the first I’d written called “Southside of Heaven” that has a line, “Money can’t buy my soul, it comes from a hard earned place”. That one for me, every night that I sing it, it’s a reminder of where I came from. It keeps me grounded.

BW: I appreciate that. A nightly humility reminder… You’ve mentioned that your influenced heavily by guys like Townes Van Zandt, Merle Haggard, Guy Clark and Willie Nelson. Aside from their obvious musical talents, is there something they embody as humans that you look up to?

RB: I’d have to say Guy Clark especially. He’s my number one influence. His attitude. His songwriting. He was singing about where I was growing up, it felt close to home. He felt reachable, local, attainable. I had a hard time relating to the others, but always appreciated their music. Guy changed that idea for me, he made it seem like I could do it.

BW: I came across a story about your early career when you were booked to bull ride (Ryan was seasoned enough to get his pro-card prior to becoming a full time musician) and play music on the same night 200 miles apart in Texas and presumably chose to follow your passion for music. What advice would you give to someone now who feels compelled by their passion, but is scared of the instability or has the fear of the unknown?

RB: Well it’s hard for me to know what to tell someone else, I just know that for me it was about trusting my gut. When you’re young and you’re out on your own, you have no home, no family; there’s nothing left to lose. I was forced to do what I had to out of survival. Sometimes it wasn’t the safest bet. Many times it didn’t work out and I learned the hard way. But I figured out where to go and not go, do and not do.

BW: What’s next for you? I know even when you aren’t on tour or recording, you don’t really sit still. You dabble in acting projects. Anything coming up to look out for?

RB: (Laughs) I was supposed to take the Summer off but yeah, actually, I’m reconnecting with Scott Hooper, (director of “Crazy Heart”) and I’m going to spend the next 3 weeks in Santa Fe, New Mexico on a film he’s making down there. It’s a Western, should be a good time. Then we have the Fall tour coming up.

A little more chit chat and Ryan told a story about an experience from a concert last Winter in Flagstaff, AZ. A family with 3 children had come out to the show and were in line to buy merchandise, but didn’t have enough money to get both the poster and the shirt they wanted. After deliberation, they left with the poster. About fifteen minutes later the 3 children came back to the booth, they had pooled their money together to buy the shirt for their dad as a thank you for bringing them out.

As Ryan shared the story, he elaborated that those moments really affect him and make him feel good to do what he does. He appreciates every person who comes out, he’s humbled by the ability to get to play for people and that folks enjoy the music he creates, allowing him to continue to do what he loves.

Ryan Bingham will be playing in Tempe, AZ at the Marquee Theater on September 13th, 2016. Tickets can be purchased here: Ryan Bingham Tickets

He’s got a voice that’s lived a thousand years, a voice of whiskey and velvet. You won’t be disappointed.