The fashion shows just keep coming in leaps and bounds, so much so that it’s nearly impossible to keep an eye on them all no matter how connected one is to their blackberry, ipad or social networking accounts. Be that as it may there is nothing sweeter than being glued to one’s screen waiting for the real time shows to come down the pike. Here are a few more of my faves from recent days.
Derek Lam’s spring collection felt like a page from the original Yves Saint Laurent playbook done in a classic American way. Lam opened with a delicious parade of all-denim looks, casting new light on the fabric as suiting, in coats and a yummy little shirts. And the trim A-line suede skirts, poplin blouses and the great outerwear are just to die for.
The collection was full of standouts like ruffled peplums, flyaway details and cape effects. The filmy thin silk cashmere sweater worn over a pleated skirt was a must have. Plus evening pieces had a decidedly daytime vibe to them and though some of the breezy print dresses didn’t make me flip, his sleek all-white finale gowns were the perfect exclamation point to the show.

Jill Stuart was completely embracing a new minimalism with super chic linens and several simple suede pieces. The palette of black, white and cream with touches of rose and navy had a distinctly Parisian vibe with gobs of pleats and printed silk blouses. Then there was her take on black tie tuxedo pieces with skinny cropped pants and black dresses. Overall Ms Stuarts show is the stuff that we girls all covet!

I have decided that when I grow up I want to be a Rebecca Minkoff girl. The seriously cool downtown chic of this collection had me at hello! Ruffles, draping and loose, flowy silhouettes were center stage in separates that included uber hip shorts, skirts, blazers and easy breezy dresses. The palette was mainly neutral with pops of color in touches of red and mustard. These pieces are what I imagine hipster editors to be wearing come next spring and summer.

Thakoon’s super relaxed white looks like cotton twill jacket and anoraks made in Swiss eyelet — opened the show. Then there were washed and faded prints, bandage dresses and sweet English garden floral numbers. Overall the use of swiss eyelets, twills, chambray denims and even oxford fabrics gave this show an airy and ethereal feeling that others designers using lots of white like Alexander Wang didn’t quite achieve. And lastly a few eye catching python print looks kept things daring and modern. 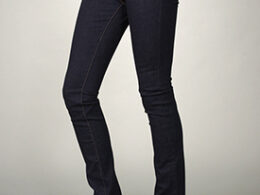 An American Girl in Paris

Being from Arizona, it’s practically impossible to pack for cold weather. I own less than 5 longsleeve tops,…
byMarlene 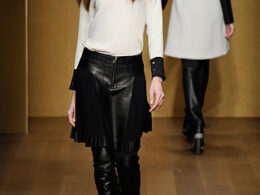 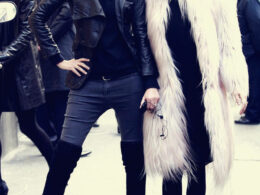 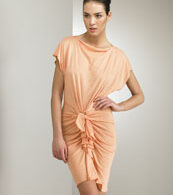 Oh yah. That title above is totally true. Can you say “yeah!?!?” Generally, when I hear there’s Phillip…
byMarlene