Karl Lagerfeld is at it again… no not another Macy’s or H&M collaboration, and no it has nothing to do with Chanel or Fendi (though the Chanel Pre-Fall collection was quite interesting)—this time it is Karl for Net-A-Porter. This is sure to be the next big frenzy, at least that is what the online luxury fashion retailer is hyping it to be, with the words “It’s Karl Mania!” right next to a ticker counting down the days, hours, minutes, and yes even seconds until the collection is unveiled.

I am all for great marketing and who doesn’t love social media, but I think the folks at Net-A-Porter have outdone themselves, to say the least. A mock news flash “live from London,” which proclaims that a missing Lagerfeld collection has indeed been captured by Net-A-Porter can be seen on the retailer’s website. Fans of the designer can also sign up to be part of a community “search” called Karl’s Kult to “hunt” for the new and missing collection. Kult members will receive up-to-the-minute news reports as well as a chance to enter competitions. Now that’s a whole lot of Karl.

If you haven’t had your share of Karl Mania just yet you can download the Karl app which has several features: a Karl game where you collect Karl heads (yes heads) for a chance to win a shopping spree on the site, a photo editing feature where you can get Karlified white collar, glasses, and hair then submit it to the Karlify gallery, the Skan feature which scans Karl (his head again) to access exclusive content, and the Collection Exposé which gives users a sneak peak of the collection.

I told you they went above and beyond… Now onto the clothes because this is what all the fuss is about after all. The website gives a preview of five of the looks from the collection which will launch on January 25, 2012. All very Karl and all white, black, and metallic grey/silver. It is very much what you would expect: high collars, button up shirts, and tuxedo-esque jackets. 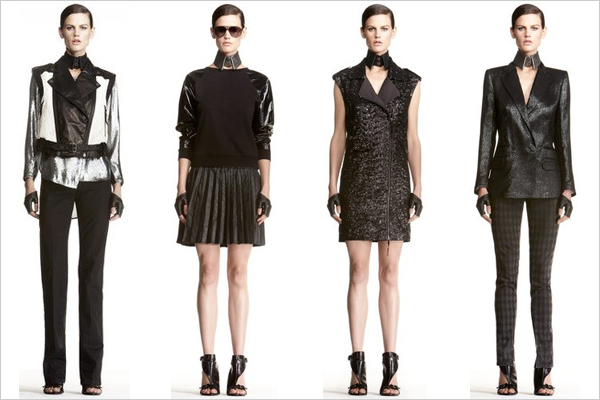 There is however a very cute and slightly girlish, pleated, black skirt that I think will be popular with those who might not be comfortable with the drama of the other pieces. The metallic grey/silver cropped pants are also great, straight-legged and hitting right at the ankle, more feminine than most of Lagerfeld’s highly androgynous looks.

There are no details about price, number of pieces, or even how long the collection will be available, but I am sure that will come as the “hunt” continues.