From the sacred grounds of Big Sur to the swashbuckling seaport of Monterey Bay, this county’s havens harbor a litany of irresistible ghost stories.  The capital of Alta California boasted gems of land and sea, a bounty for the brave who endured a long and tumultuous history rife with shootouts, shipwrecks and sword-wielding Spaniards. Today, visitors can tap into a variety of haunted sites on their own peril or with The Ghost Trolley of Monterey. Check out the lores and lures of these paranormal sites that are sure to thrill: 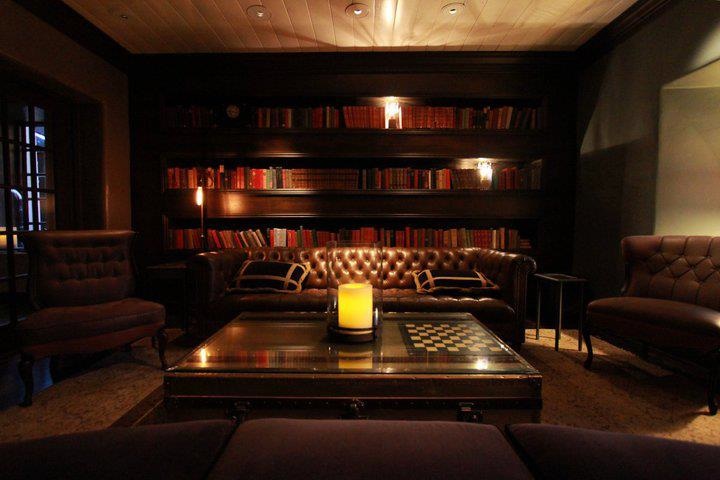 Lore – This classic tile-roofed adobe in Old Monterey is flush with paranormal activity. Built in 1833, the meandering two-story building was purchased in 1834 by English sailor James Stokes, who later became Mayor. A happy ghost named Hattie Gragg lived in the adobe as well, making it the town’s social spot. She is regularly reported as an elderly woman in an ankle-length skirt causing flashing lights, mysteriously salting wineglasses and slamming doors in the upstairs bedroom where she died in 1948. During the renovation of the new restaurant in 2010, workers adopted a strict buddy system at night.

Lure – Summer/2011, Restaurant 1833 debuts under new ownership with a chic redux. The 164-seat restaurant takes a twist on its past with rare antique lighting fixtures, period floor lamps, lounge-friendly furniture and seven dining rooms including Hattie’s Room – complete with glowing salt crystals in a boudoir-type setting – to the Library, a colonial masterpiece sporting dark wood accents. Mixology is king here, with a sexy entrance bar/lounge taking on an apothecary backdrop of antique lab bottles and custom botanicals. The menu reflects a hyper-local focus with a farm-to-table emphasis. 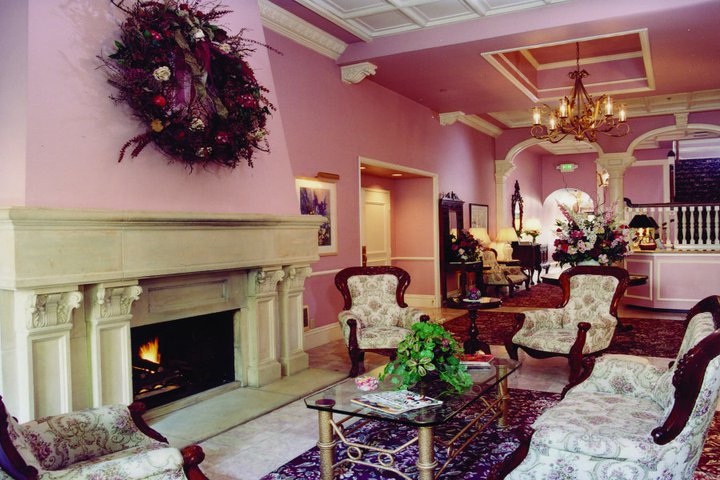 Lore – Paranormal seems to be normal at this vintage 1904 building where a ghost, affectionately called Fred by the staff, and other spirits romp regularly. The turn-of-the-century hotel’s sculpted façade with ornate moldings, bay windows and amazing architectural features is home to an image of a man dressed in Edwardian clothing with a high hat, known to be spotted in the mirror facing the front desk. Most amazing is his presence in room 217, where guests and ghost hunters have heard a male voice talking about 75 stairs. Televisions and radios pop, the digits 7 and 5 appear randomly and apparitions are commonplace. Also on site is a ghost image of a girl about 13 years old sitting on the hotel staircase.

Lure – Today, the 40-room Monterey Hotel is an ideal locale smack on the Path of History Walking Tour in Old Monterey. Renovations in 1982 and 1996 delivered hand-carved stair railings, redwood ceilings and a meticulous restoration recreating the property’s original European style. The ornate original elevator cage with gilt edging and beveled glass is still in place but not operational. Across the street, the Golden State Theatre (1926) delivers a cross mix of nostalgia backed with a year-round roster of film festivals and concerts. The mighty Wurlitzer pipe organ also makes a debut now and then. 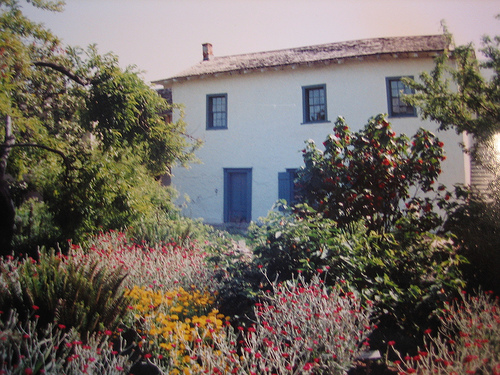 Lore – Built in the 1830s and operated as a boarding house and the French Hotel, theStevenson House has been known to host “The Lady in Black” and other ancillary ghosts for more than 80 years. Named for the famous 19th century author who lived here for only one year, this two-story adobe is rife with paranormal activity, including the sounds of a trunk being dragged across the upstairs floor, books pulled from shelves and open to well-worn pages, and bizarre experiences reflecting life in the late 1800s. Many believe Manuela Girardin, its proprietor in 1879, walks the hallways and nursery in a long black Spanish gown, as well as other ghosts who roam the garden on a regular basis.

Lure – Part of the Monterey State Historic Park system, the Stevenson House has been beautifully restored as a period home with several rooms devoted to “Stevensonia” and is a top stop for scouting the Scottish novelist, poet and travel writer’s works. It is said that the Monterey Peninsula had a significant influence on his setting for Treasure Island. (Saturdays 1-4 p.m., free). 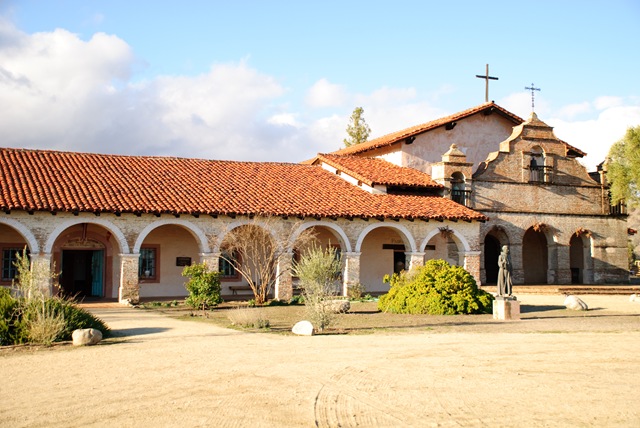 Lore – Two apparitions have been documented in and around this National Register of Historic Places site, including a candle-carrying monk who walks the mission grounds and Cleora, the ghost of the Headless Horsewoman.  Soldiers stationed at Ft. Hunter Liggett have reported the vision of a headless woman on horseback riding the crest of the hills near the mission.  Local Indians claim her husband caught her with another man who was prospecting the area and, in a rage, killed her.  To ensure her misery and shame, he buried her body and head separately and her spirit rides the countryside in search of her remains.  The best time to spot Cleora is in front of the mission church at sunrise and sunset.

Lure – Established in 1771, Mission San Antonio de Padua is the most remote of the 21 Spanish missions and well worth the 25-mile drive southwest of King City.  It was the most successful mission in educating and converting Indians to Christianity as well as the most prosperous of all the missions.  Today, the missions and grounds have been lovingly restored by private funding, including the Hearst Foundation and local soldiers working off-duty.  Nearby, seeking a little refuge for his cigar-toting equestrian friends, Hearst commissioned Julia Morgan to design a “small” 14-room hacienda in the late 1920s named Milpitas Ranch House. 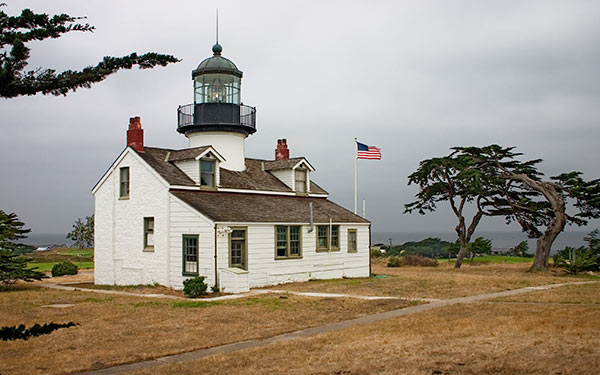 Lore – Lighthouses and ghost stories go hand in hand, largely due to the isolation, rugged conditions and disasters at sea associated with them. One such tale surrounds Pacific Grove’s Point Pinos Lighthouse where Emily Fish became keeper in 1893. Kicking off visits with piano recitals and exotic tea parties backed with a killer ocean view, the “socialite light keeper” was a bon vivant of her day and ruled the roost until poor health required a replacement in 1914. Today, her apparition is believed to be all the more present and wanders the second floor rooms, moving objects and leaving behind the scent of perfume and a swishing noise reminiscent of the long skirts of the day.

The Point Sur State Historic Park and Lighthouse in Big Sur is another scary stop, commonly listed among the top 10 haunted lighthouses in America. Many apparitions call this outback lighthouse home, including the spirit of the teenage daughter who died there of tuberculosis in 1900.

Lure – Opened in 1855, Point Pinos Lighthouse is the oldest continuously operating light station on the West Coast and a true gem to visit. Nearby, visit the wintering butterflies at the Monarch Grove Sanctuary or tee it up at Pacific Grove Golf Links – the poor man’s Pebble Beach ($2 donation). Built in 1889, The Point Sur State Historic Park and Lighthouse with its modern aero beacon is a top watt tour, especially during the seasonal full moon evening tours or annual ghost tours in October. ($10-$15). 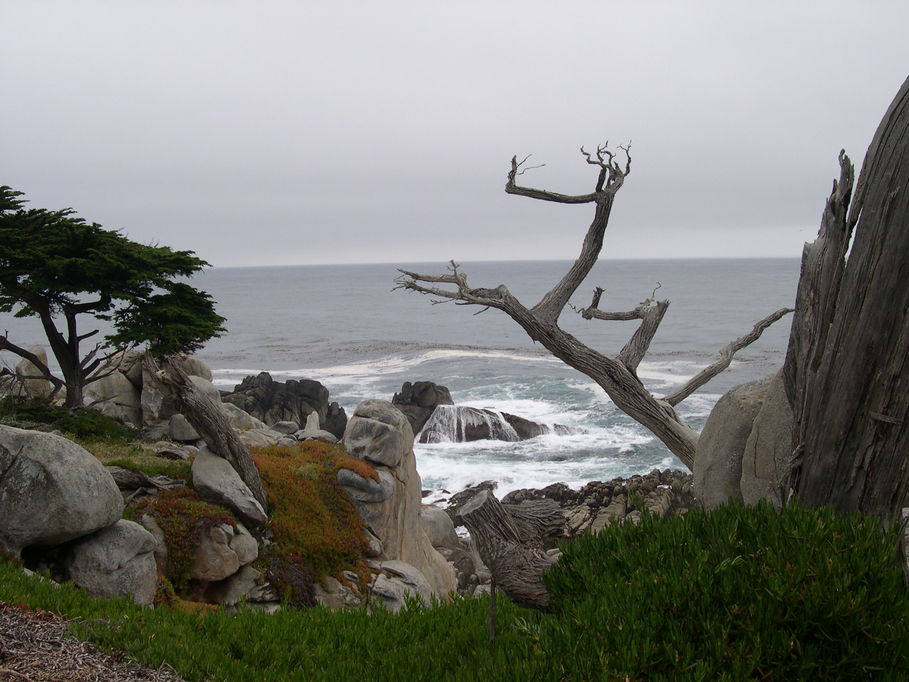 Lore – Tucked along scenic 17-Mile Drive lays a weathered, twisted Monterey Cypress tree where the apparition of a “lady in lace” has caused several minor accidents. Local ghost hunters believe this woman who wanders in flowing robes or possibly a wedding dress with a train dragging on the ground is the ghost of Dona Maria del Carmen Barreto Madariaga, former owner of 4,000 acres in what is now the glitzy stretch called Pebble Beach. Apparently, Barreto grew tired of her solitary life and sold the remote real estate for 12 cents an acre ($500). Lore has it she later moved to Monterey but never stopped loving her cherished beachfront digs and regrettable decision to sell. Thus, the lady in lace haunts Ghost Tree and its nearby cliffs, flowing in and out of traffic in a surreal backdrop of fog and horns.

Lure – Tucked between Pacific Grove and Carmel, this fabled stretch of land delivers nature at its naked best. Marker #17 winds to the sinister silhouette of Ghost Tree, one of the West Coast’s top surf spots due to its mammoth waves. Curve around and the Lone Cypress (#16) steps up as one of only two native Monterey Cypress groves in the world (the second is at Point Lobos Nature Reserve). A turn or two through the 5,000 acre Del Monte Forest packs a guilt-free peek into the lifestyles of the rich and famous followed by a pit stop not to be missed: sunset cocktails at the Inn at the Spanish Bay backed with a lone bagpiper cresting the famed greens on his daily rounds. ($9.75).

Lore – Designed in 1905 at the height of the new bohemian community, La Playa Hotel was the handsome home of artist Chris Jorgensen and his wife Angela Ghirardelli, heiress of the famous chocolate family in San Francisco. One afternoon, their favorite niece Alida never returned from her daily swim in Carmel Bay; she drowned from an unruly undertow. The tragedy led the family to move to San Francisco where one year after her husband’s death, Angela passed in 1936. Today, it is believed Angela and her niece are fixtures at their beloved Carmel home and have been standing at the foot of people’s beds or walking the expansive gardens — she in long skirts of the day and the niece in what appears to be a classic early 1900s swimsuit and wet hair.

Lure – Kickstart that next love fest with an escape to this historic landmark rife with award-winning English gardens (a regular Sunset magazine spotlight) and a sleek little line-up of guestrooms and hidden cottages overlooking the sea. If Mediterranean is the mantra, this sprawling villa-like property speaks volumes. The Grande Dame of Old Carmel is an escape from reality, backed with blossoming florals, soft ocean breezes and top-of-the-line service. Pack the walking shoes and a sense of adventure. 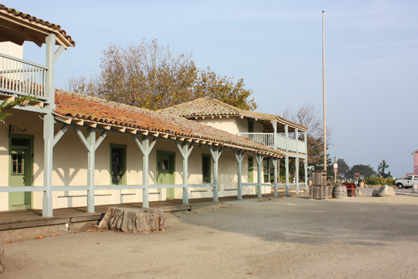 Lore – In 1821 the stately Mexican Custom House was the first refuge for ships after the arduous passage around Cape Horn. Crews from Spain, Portugal, England and Mexico hit terra firma in dire need, many decimated by illness, others simply exhausted and seeking salvation in the quiet waters of Monterey Bay. Cargoes of clothing, machinery and medicine were unloaded, inspected and taxed at the Custom House before being sold to merchants. This hub of commerce continued until 1860, but the clamor and cacophony of the day still remains. Apparitions include a Mexican man and boy who are believed to have been murdered in the building, the sounds of boots treading floorboards, cold spots and a general sense of sailors seeking solace from the hard times at hand.

LURE – Today, this tourist site at the foot of Fisherman’s Wharf on Custom House Plaza offers an inside look at life back when Commodore John Drake Sloat raised the American Flag in 1846. Recognized as the oldest government building in California and State Historic Landmark #1, this is the bull’s-eye for history buffs seeking a little back-to-the-future by the sea. The massive Mexican-style adobe has a perch over Monterey Bay National Marine Sanctuary and is a key launch spot for whale watching, kayak tours and local abalone. (Sat. – Sun., $3.00). 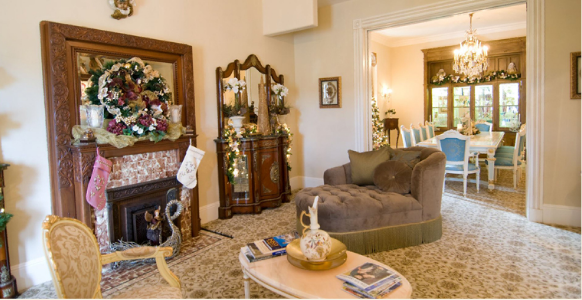 Lore – Built in 1891 as the Hiram Corey House, this gracious estate boasted the best beef and dairy ranches in California. The rambling home included a boisterous brood of Hiram’s sister’s children, including the eldest daughter, Emma. Following the death of his wife, Hiram remarried and the new mistress of the house eventually disconnected Emma and the children from their beloved family retreat, a loss very upsetting to all.

In 2007, Samuel and Linda Persall began the restoration of the grand Victorian, named Chateau Coralini Retreat & Spa. Immediately, construction crews felt the presence of a “lady in the house.” Glances through windows, doors mysteriously opening and closing, and a curious but happy apparition passing from room to room are just some of the experiences. It is the Persall’s belief that this spirit is indeed Emma, who has longed to return home.