Nothing beats a case of the Mondays more than a belly-filling, taste bud-pleasing breakfast. In celebration of its 20th anniversary, the Valley’s popular U.S. Egg, a family-owned and -operated breakfast and lunch eatery, has opened its fourth location in Chandler. The three other U.S. Egg locations are in Tempe, Phoenix and Scottsdale. “We are honored to have been servicing the Valley for 20years,” said Gebran Gebran, co-owner of U.S. Egg. “We are still looking to grow and expand to other parts of the Phoenix metro area, while also maintaining local support and community relationships.”
The brand new Chandler restaurant is located at Kyrene Road and Chandler Boulevard. The new restaurant features artwork throughout the Chandler location including a United States flag made out of recycled egg cartons (pictured). Local artist Jeff Zischke designed the artwork, which was designed to make the restaurant a warm, inviting atmosphere in an eco-friendly way. Chandler’s U.S. Egg will dish up the same great, hearty menu that the restaurant is known for, from plate-size pancakes, half-moon omelets, delicious skillets and U.S. Egg’s piece de resistance, the fiber- and flavor-packed protein pancakes. (Local athletes are known to load up on these.) For lunch, the eatery has a selection of yummy sandwiches and salads. There are also seasonal offerings, including the fluffy, could-be-a-dessert pumpkin waffle, topped with whipped cream.
In other U.S. Egg news, the Valley-based restaurant also renovated its original location, from the furniture to the artwork, in Tempe in the summer. The Scottsdale location is set to be renovated in April. http://www.useggrestaurant.com/. 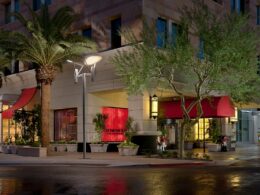 A Taste of Dominick’s Steakhouse

A few weeks ago, we had the opportunity to enjoy a meal at Scottsdale Quarter’s beyond-luxurious Michael Dominick’s…
byMelissa 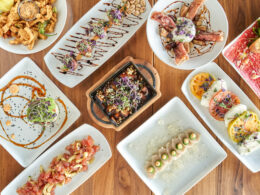 Bourbon & Bones Chophouse | Bar is set to open a second location in Gilbert, at San Tan Village, despite all odd in this COVID-19 era.
byTyler Hollis 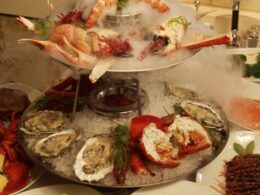 Though we’re residents in a completely land-locked state, that doesn’t mean that Phoenix and Scottsdale aren’t home to…
byMelissa 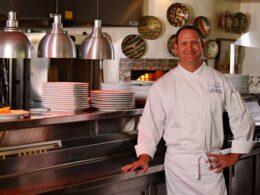 A Taste of Aunt Chilada’s