Located in Tempe, Arizona, Four Peaks Brewing Company is arguable The Valley’s most famous microbrewery, distributing their brews to pubs and restaurants all over the state of Arizona.  You’ll even be able to find their bottles at local grocery stores.  Originally a creamery in the 1800’s, the location is huge and nearly all of the seating space is outdoors. However, even on a Monday afternoon, you might have trouble snagging your favorite spot.  We bet you’ll see college students, families, business meetings, sports fans (there’s huge TV’s all over the bar) and a Pink Jeep Tour all in one weekend sitting.
Don’t try to order a Bud Light here; Four Peaks only serves their brewed beers. They’ll have new seasonal beers to try, but you’ll always see eight of their signatures on the menu.  If you’re not a huge beer drinker and would like to stay on the lighter side, try the Sunbru or the Hefeweizen.  For the more serious beer drinker, try the Raj IPA or our personal favorite – Kiltlifter. The food is worth writing home about as well. From salads to salmon to burgers with beer-battered buns, we haven’t tried something we’ve disliked yet! Each item on the menu also has a recommendation for a signature beer .
1340 East 8th Street #104 Tempe, AZ 85281
(480) 303-9967
http://www.fourpeaks.com/
Pinnacle Peak Steakhouse and Microbrewery

Just recently mentioned in our Top Country Bars in Phoenix post, Pinnacle Peak Steakhouse and Microbrewery located in North Scottsdale is an all out Western establishment. It was first opened in 1957 as a general store and rest stop for travelers heading out to the nearby lakes. Now, they have more than one huge patio, several dining rooms and specialize in large events. It’s a must when we have out-of-town guests – but remember, don’t wear a tie unless you want it memorialized on the ceiling.
We have to admit their beers, like the White Chocolate Ale and the Gunslinger Stout may be more complicated than their menu which mainly consists of…steak. But darn good steak it is and fit for a cowboy!
10426 East Jomax Road
Scottsdale, AZ 85262
(480) 585-1599
www.pppatio.com/
San Tan Brewing Company
Located in Chandler, Arizona and opening in 2007, San Tan Brewing Company doesn’t have a history  like Pinnacle Peak or Four Peaks, yet it is located in Chandler’s historic district and was originally the historic Valley National Bank.  You wouldn’t believe they were only a few years old by the crowd or their perfected brews!  You can find San Tan beers in grocery stores, liquor stores and fine restaurants and resorts all over The Valley, and we understand why!  The Devil’s Ale is their most famous brew and a must-try.
Unlike many other breweries, San Tan Brewery is great for families. Weekly live music, beer dinners, Monday Movie Night and beer festivals make them a neighborhood (and Valley) favorite. They have a great happy hour and amazing food to match the beer. We love their pizza and Pesto Ranch Turkey Salad.
8 South San Marcos Place
Chandler, AZ 85225
(480) 917-8700
www.santanbrewing.com
Papago Brewing

We’re so excited to share our love for Papago Brewing, we don’t even know where to start!  Located just before Old Town Scottsdale in Scottsdale, Arizona, Papago Brewing is a small pub with the biggest and best selection of beers we’ve ever seen!  Walk in and grab high-end beers to go from their carry-out section (one bottle can cost up to $30!) or stay a while and you might just become a beer expert in a night!
Papago Brewing brews their own beers (and they sell chapstick in the flavors), but they also have a massive selection of microbrews from all over the world. They change the 30 beers they have on tap daily, and also offer dozens of beers from the bottle. Is it overwhelming? Yes. Until you speak to your server or bartender, who will have tried every beer offered that night, and will also know what you might like if you enjoyed the Delirium Tremens or if the only “special” beer you know is Blue Moon. We highly recommend trying more than just one type of beer here, and getting to know your server. The menu is mostly bar food, but we recommend splitting a few appetizers or a pizza if it’s your first time trying a strong beer. You’ll want to eat something since most of the beers you try will have a higher alcohol content than a Heineken, but if you eat something too heavy you’ll have a hard time trying new beers as well.
7107 East McDowell Road
Scottsdale, AZ 85257
(480) 425-7439
www.papagobrewing.com/
Sun Up Brewing Company
Located on Camelback near Central Ave, we love Sun Up Brewing Company for it’s location, happy hour, brick walls and interactive atmosphere. The location has gone through several renovations, but these owners are passionate about their success and you’ll notice customer service at Sun Up Brewing Company is above the bar.  They brew six of their own; our eyes always drift to the Sun Up IPA, which is the recommended favorite.
We also love the menu because although it still does have a bit of that pub food flair, it is truly anything but!  The Blackened Sun Up Salmon,  Mussels, and Shrimp Tacos have us drooling.
322 East Camelback Road
Phoenix, AZ 85012
(602) 279-8909
www.sunupbrewing.com 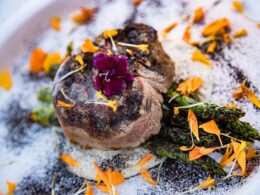 El Panzon y Frida, found just behind W Scottsdale, boasts an eclectic menu from Executive Chef Paulina Martinez, that we were able to sample during a media preview, served in a beautiful space bursting with color, texture and an incredible hand-painted mural of Frida Kahlo.
byMelissa 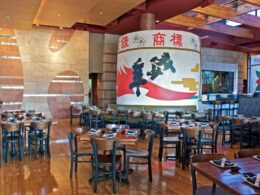 One of Scottsdale’s sexiest restaurants now has a new look and menu. But don’t worry–those iconic torches are…
byMelissa 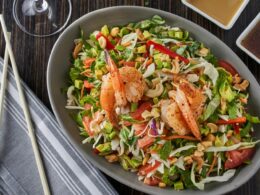 Recently, during a bustling lunch hour, we had our first taste of Ling & Louie’s Asian Bar and…
byMelissa 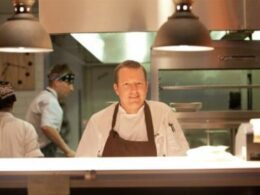 The talented folks behind Beckett’s Table in Phoenix have announced a new opening, Southern Rail. This will be…
byMelissa