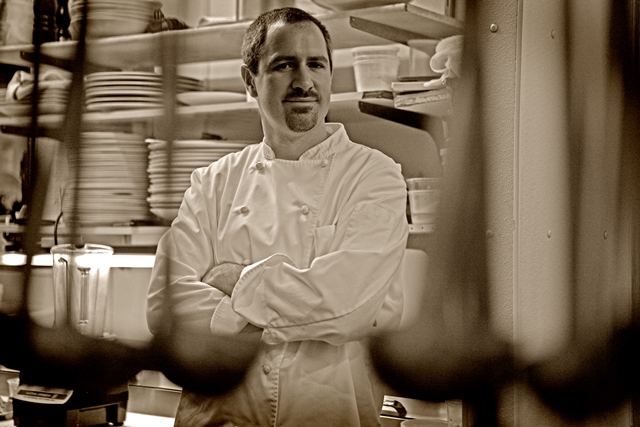 Two of the Valley’s favorite chefs, Payton Curry and Kevin Binkley, have announced plans to open new restaurants in the near future. Curry and Dave Andrea of Old Town Scottsdale’s popular beer-and-brats joint Brat Haus have announced their new concept, Taco Haus, slated to open in early 2014. The new Scottsdale-based restaurant will blend culinary influences from Mexico, Spain and Central and South America and be a modern Mexican-style cantina. Taco Haus will showcase an open rotisserie live-fuel cooking station (whole roasted chickens will be available for take-away) as well as a ceviche bar. The menu will have an emphasis on “Latin-inspired cuisine spanning from Mexico to Peru with tortillas made in house, seafood flown in fresh, and Niman Ranch pork and beef.” To drink, expect hand-squeezed, tableside margaritas, a variety of Micheladas, house horchata and aguas frescas will also be available with or without alcohol.

Meanwhile, Chef Kevin Binkley’s (pictured) latest venture, Bink’s Scottsdale, is slated to open in the Hilton Village late December 2013. The award-winning chef (he was named Arizona Foothills Magazine’s Valley’s Top Chef two years in a row) is known for his work at the famous Binkley’s Restaurant, Bink’s Midtown and Cafe Bink. Open for brunch, lunch, happy hour and dinner, dishes at Bink’s Scottsdale will focus on locally grown and harvested meats, fruits and vegetables. The restaurant will also provide a full bar with a regular wine list, as well as a reserve wine list. Bink’s Scottsdale will boast a fresh look with a casual atmosphere. www.binksscottsdale.com.