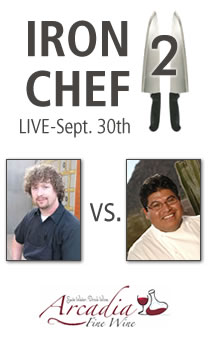 Speaking of Iron Chef, Savor Scottsdale will host its very own culinary competition next week in preparation of Crave Arizona at the end of October. Iron Chef 2: Duel in the Desert culinary event is held in conjunction with Arcadia Fine Wine on Sept. 30. Watch as Savor Scottsdale chefs, Mel Mecinas (Talavera at Four Seasons Resort Scottsdale) and Payton Curry (Digestif) battle for the coveted title of Iron Chef preparing culinary items using a secret ingredient. The winner will be determined by a guest poll that will be held at the end of the event. Passed hors d’oeuvres, seated entrees and wine pairings are included.

The cocktail reception begins at 6p while the Iron Chef duel between chef Mecinas and chef Curry starts at 6:30p. To sweeten the deal, the first 100 attendees (who purchase this $100 ticket package) get a complimentary four-piece Riedel tasting set (valued at $123) and complimentary tickets to Crave Arizona culinary festival’s Arizona Grand Tasting. Tickets to the Iron Chef event at $65 per person. The event will be held at the Wolf Sub Zero Showroom, 15570 N. 83rd Way in Scottsdale. http://www.savorscottsdale.com/news.php.