Foodie news for the week of Dec. 3.

AZFoothills.com’s taste tests of Scottsdale’s The House Brasserie and The Cove Trattoria.
Try these Repeal Day-influenced cocktails to pay homage to the end of Prohibition.
This Friday and Saturday, head to Heritage Square in Phoenix for the inaugural Phoenix Brewers Invitational: Get Crafty 2012. The two-day event promises more than 60 craft breweries, live entertainment by 80 Proof, beer-related vendors, beer memorabilia, home-brewing demos and a wide variety of local foods from some of Arizona’s top food trucks. A percentage of the proceeds from this event benefit The Beer for Brains Foundation.
Stop in for a cup of joe tomorrow before work–it’s for a good cause. Friday, Dec. 7, all 10 Dutch Bros. locations will be donating $.50 per drink sold to the Boys & Girls Clubs of the East Valley.
The Wright Bar at Arizona Biltmore has debuted a brand new Holiday Spirit Hour. Through Jan. 1, from 5 to 7 p.m. daily, stop into the Phoenix resort for special holiday cocktails (including a gingerbread martini), $6 wine selections and a specially priced starters.
Monday, Dec. 10, ZuZu at Hotel Valley Ho (pictured) hosts its annual Champagne Chef’s Table . The evening kicks off with a Belvedere cocktail reception in the lounge at 6:30 p.m., followed by dinner at 7 p.m. The four-course dinner is $68 plus tip and tax. Reservations are accepted at 480.421.7997.
For $35 per person plus tax and gratuity, Milagro Grill in Arcadia will host a very special tacos and tequila dinner on Wednesday, Dec. 12 at 5:30 p.m. (Milagro Grill was named the grand prize winner at The Arizona Taco Fest held in October, so don’t miss it!) 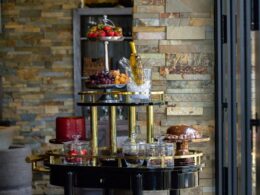 We think dessert isn't something to be taken lightly. And we're excited to hear that neither does Scottsdale Quarter's Tanzy thanks to the debut of its new custom-designed dessert cart.
byMelissa 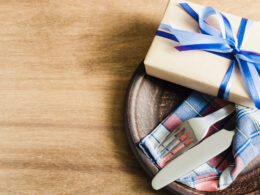 Father’s Day Brunch, Lunch, and Dinner Deals throughout the Valley

It's never too early to plan your Father's Day celebrations, so here is a list of the Valley's Father's Day brunch, lunch, and dinner deals.
byTyler Hollis
21 shares
21
0
0 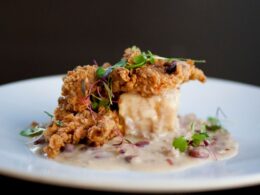 One of the top restaurants in Downtown Phoenix, Blue Hound Kitchen & Cocktails at Hotel Palomar Phoenix, has…
byMelissa 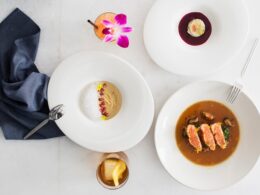