Good news for those trying to get off the grid, Whirlpool Corporation recently announced that it will produce one million smart energy clothes dryers by the second half of 2011. The increase in production is partly due to the manufacturer’s participation in the U.S. Department of Energy’s Smart Grid Investment Grant program. 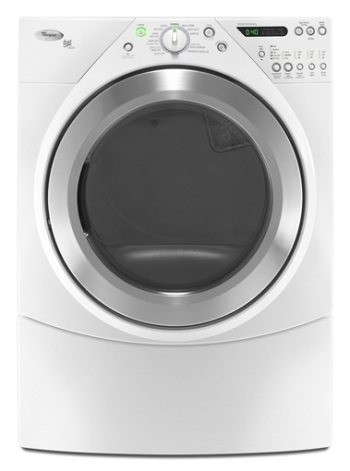 These U.S. manufactured appliances will be capable of reacting intelligently to signals from the smart grid by modifying their energy consumption to save consumers money on their home electric bills. In markets where utilities offer variable or time-of-use pricing, these dryers could save a typical consumer $20 to $40 per year, while also benefitting the environment.

“Peak electricity demand drives disproportionately higher energy costs,” said Mike Todman, president, Whirlpool Corporation North America. “If the differences between peak and off-peak energy costs are passed along to consumers, then Whirlpool Corporation believes there are great opportunities for home appliances to shift energy consumption outside of peak hours without forcing consumers to compromise on performance.”

The increased usage of smart appliances will also increase the value of renewable energy sources such as solar and wind power, which are inherently variable due to weather. When wind- and solar-generated power availability is reduced, smart appliances will allow for the temporary reduction of energy consumption, helping to ensure reliable performance by the electrical grid even during periods of peak demand. The deployment of one million smart grid-compatible dryers could shift the equivalent energy of 10 coal fired, 500-megawatt power plants.

“Our company has been delivering innovations that meet consumer needs and desires for nearly 100 years, and for decades has been investing in the technologies that give consumers the ability to save energy,” said Todman. “Whirlpool Corporation helped to develop the energy efficiency program known today as Energy Star. The stimulus funds being made available by the DOE will complement and accelerate the work that Whirlpool is already doing in this area.”

In 2006, Whirlpool Corporation was the first appliance company to conduct a smart grid pilot, using 150 Smart Energy dryers in the Pacific Northwest. Whirlpool created and holds key patents for this type of technology.

“The pilot yielded remarkable results: when a grid sensor observed a peak demand event, the dryers turned their heating elements off, reducing their power demand by 95 percent, with little to no impact for consumers,” said Hank Marcy, vice president, technology, Whirlpool Corporation.

This announcement builds on Whirlpool Corporation’s commitment that by 2015 all of the company’s electronically controlled appliances it produces – everywhere in the world – will be capable of receiving and responding to signals from the smart grid.