This was quite a surprise to me. Audi, the acclaimed car manufacturer, is now also producing concert grand pianos. If that isn’t a jump, I don’t know what is. 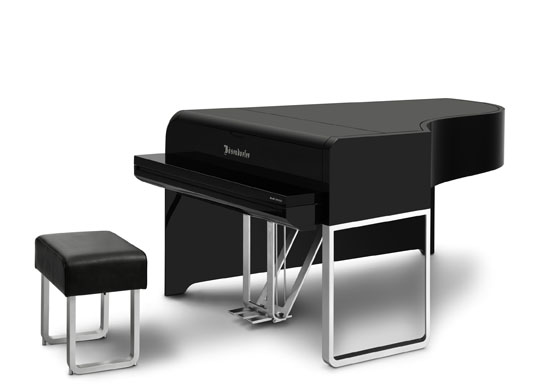 The Audi Design Studio team in Munich decided to tackle the task of housing a concert grand piano in an Audi “outer skin”. At a price of approximately 100,000 euros, the Vienna-based company will be including this design icon in its high-quality cataloge of instruments from July 16 onwards – the day of its world premiere.

“You can imagine the respect with which we approached the challenge of redesigning a musical instrument” says Wolfgang Egger, Head of Audi Group Design. But he and his team made a virtue out of necessity: “The limitations we faced were necessary as a means of stimulating our creativity. We were obliged to study the instrument in depth, and develop an all-embracing concept from the very start. The project was a useful source of experience for our young designers, and will benefit them later when they work on car design.”

The team from Design naturally cooperated closely with the specialists at Bösendorfer, since Audi itself is clearly not in a position to build grand pianos. Bösendorfer, on the other hand, has stood for excellent quality and correspondingly good acoustics since 1828. For Audi, the top priority was not to exert any adverse influence on the instrument’s sound. In the piano workshops in Vienna, the highest standards in both materials and workmanship apply. These enormously complex articles, with very delicate mechanical elements, call for precision craft skills, with tolerances down to one five-hundredth of a millimeter. The strings, from treble to bass, can exert a tension of as much as 20 tons on the cast metal frame inside the soundbox.

Although various elements directly associated with the case of the piano were modified, the acoustics were unaffected. But the Audi Design grand piano is certainly “different”, even at first glance. “Generous surface areas ensure formal clarity; there are no decorative applications, the edges and lines are sharply drawn, the joints logically positioned. All these are important aspects of the Audi design,” says Designer Philip Schlesinger, who implemented the project at the Concept Design Studio in Munich. One of the most striking features is the lid, which extends without a break down to the base – an Audi innovation that yields a large, one-piece surface.

The decision to design an Audi concert grand piano is a logical consequence of many years of cultural involvement by the brand with the four-ring emblem. This includes the high-quality jazz meetings at the Audi Forum in Ingolstadt where the Audi Design grand piano will in future be seen and heard.

The Audi Design grand piano will have its world premiere at a major ceremony held on July 16, 2009 in the Audi Forum Ingolstadt to celebrate Audi’s centenary. The new instrument can be ordered via the Internet at audi@bosendorfer.com.