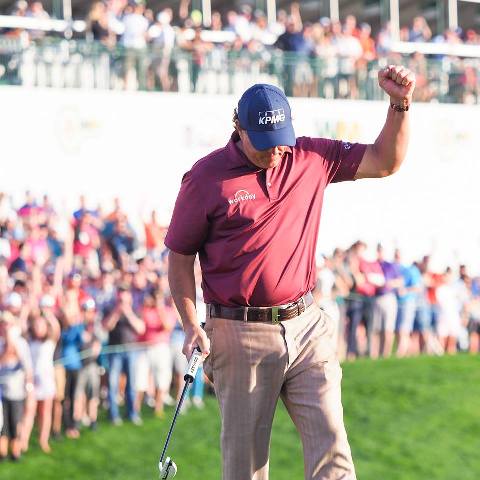 If you’re lucky enough to attend the Waste Management Phoenix Open this week or any of the other fantastic golf tournaments this season, there are rules – spoken and unspoken – that you need to follow in order to be considered a respectful golf spectator. Keep the following rules and basic terms in mind.

Stroke: Is the forward movement of the club made with the intention of striking at and moving the ball.

Par: This is the term used to give a value to a golf hole or the course as a total. A hole may be designed for a par value of 3, 4 or 5. Championship Golf Courses often have a total par value of 70, 71 or 72.

Handicap: The system used to rate the average number of strokes above par a player scores in one round of golf. This system allows golfers at different skill sets to compete fairly against each other.

Birdie: A total score of one under the designated par for the hole played.

Bogey: A total score of one over the designated par for the hole played.

Dress Appropriately: Attire should be modest and sensible, so as not to distract from the game. A good tip is to dress similar to the golfers themselves. Khakis, polos and comfortable walking shoes are always a great decision.

Be Quiet: Spectators should be seen and not heard in most cases. Turn your cell phone off, and keep it in your bag or pocket. Don’t speak or cheer until a player is finished. The “golf clap” exists for a reason it’s the game’s subdued show of support.

Don’t speak to players: While you might give a general cheer after a great shot, more than that is unacceptable. Furthermore, don’t try to offer advice to the players. They are the professionals for a reason.

Down in Front: The gallery at a pro tournament can be several people deep. Respect that others behind you are also trying to see the action. If possible, kneel down. If you have big hat, take it off.

Follow these simple guidelines and you’ll be a seasoned golf spectator in no time! —Mike Poe, General Manager of Quintero Golf Club