Celebrities hit the red carpet dressed to the hilt for the American Music Awards at the Nokia Theatre in Los Angeles Sunday evening. While a Versace-clad Lady Gaga predictably surprised arriving atop a white horse made of people, Miley Cyrus shocked in another way by covering up in a white suit, despite forgoing a shirt underneath her buttoned blazer.

Here is some of the best red carpet fashion from the 2013 American Music Awards:

Lady Gaga arrives atop a white horse composed of people.

With neither a bikini nor foam finger in sight, Miley Cyrus was low key in a white suite ensemble.

Katy Perry arrived to the awards show in a strapless Oscar de la Renta gown that was both playful and elegant. Perry proceeded to kick off the show by performing her latest single, “Unconditionally.”

A more grownup Ke$ha donned a floor-length black gown, but was sure to keep her quirk with candy-colored locks. The singer later hit the stage with the show’s host, Pitbull, to perform “Timber.”

Only a supermodel like Heidi Klum can rock this daring Marchesa number. 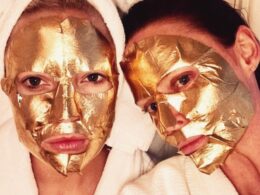 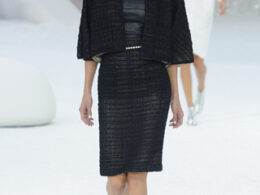 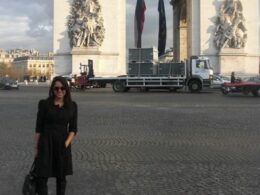 Is the sky blue? Yup, it’s about as blue as Marlene’s capabilities to go on and on about…
byMarlene