Although Lindsay Lohan is reportedly jobless in the movie industry and has recently been dumped by DJ girlfriend, she has, however, ventured into the beauty business and just yesterday launched Sevin Nyne Tanning Myst in collaboration with celebrity airbrush tanner Lorit Simon in Santa Monica. Just in time for summer, Sevin Nyne, named after Lohan’s lucky numbers seven and nine, can now be found in your local Sephora. 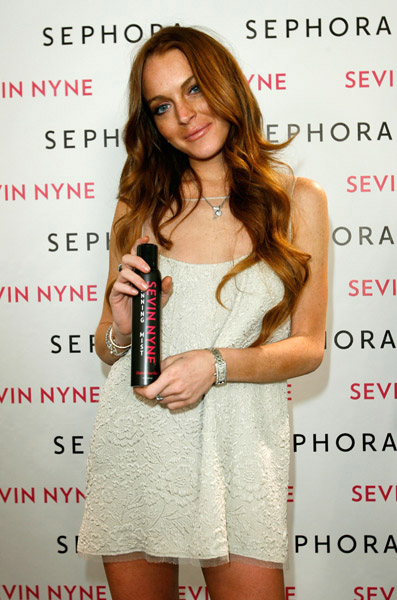 Actress and Singer Lindsay Lohan always sports a tan body with a golden glow even though she naturally has a fairer complexion. Both against any skin damaging tanning techniques, celebrity airbrush tanner Lorit and Lohan teamed up to make a luxurious tanning mist that was once only available to Lorit’s celebrity clients. The dynamic duo also hopes to encourage men and women to stay out of the sun and “cherish their skin” and is giving a portion of the proceeds to skin cancer awareness charities.

Sevin Nyne is infused with Goji Berry extract, known for its powerful antioxidant properties, and Chardonnay extracts to help keep the skin hydrated. It is said to provide an even, natural looking tan that is given in an easy-to-use, environmentally friendly aerosol can. 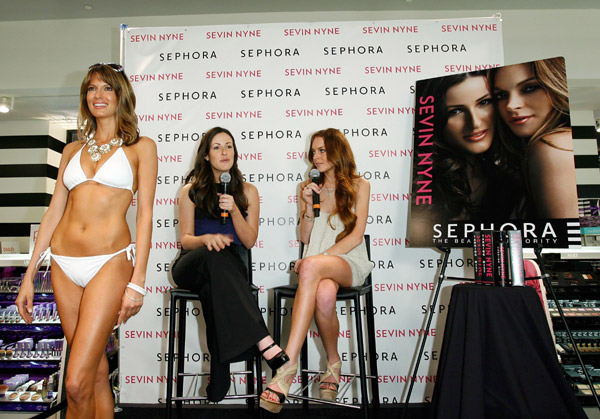 “I have tried every tanning product on the market and worked with the best tanners in the business. When Lorit and I met, we thought it would be great to bring a quality product at a reasonable price to the market so everyone could enjoy a professional spray tan,” Lohan said.

Sevin Nyne Tanning Mist is the first of many beauty products to come from Sevin Nyne.

Lindsay Lohan attended her launch party for Sevin Nyne at Sephora in Santa Monica on April 30.

Lindsay Lohan Facts: Lindsay Lohan first hit the big screen at age 11 when she played identical twins in Disney’s 1998 remake of “The Parent Trap.” Lohan became a household name after she starred in her hit movies “Freaky Friday,” “Confessions of a Teenage Drama Queen,” “Mean Girls” and “Herbie: Fully Loaded.” In 2004, she launched her first album “Speak” and in 2005 launched “A Little More Personal,” which debuted at number 20 on the Billboard 200 chart, but dropped under the top 100 within six weeks, according to Wikipedia. FHM voted Lohan as #10 on the list of “100 Sexiest Women” and she was #3 on in Maxim’s 2006 Hot 100 list. But in 2007, Lohan rose to number one on Maxim’s “Hot 100,” according to Wikipedia.

Sephora can be found in Scottsdale Fashion Square and other Valley locations. Visit Sephora.com for more information.