With all the flashing lights, bubbling Champagne, glittering confetti and that special midnight kiss, don’t forget to step outside and feast your eyes on the rare blue moon set to appear this New Year’s Eve! 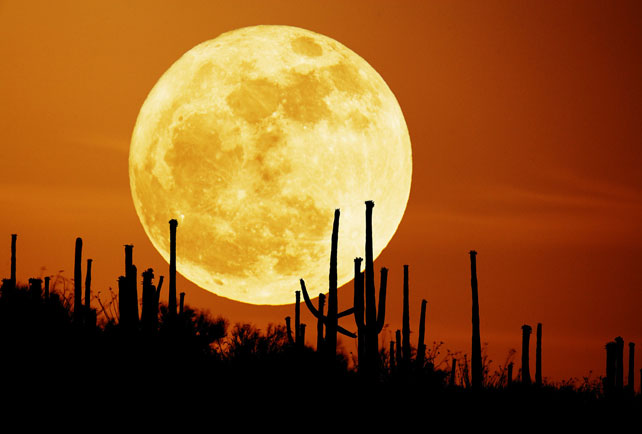 As amazing as it would be to see an actual blue-colored moon on New Year’s Eve, the bright night will be lit with a white moon. A blue moon is, by definition, the second full moon in a month, which only occurs (on average) every 2.5 years. A full moon lights up the sky every 29.5 days. And the last time there was a New Year’s Eve blue moon was in 1990!

This month’s first full moon occurred on Dec. 2 and the last time there was a blue moon was in May 2007, according to the Associated Press.

Director emeritus of the Miami Space Transit Planetarium, Jack Horkheimer, commented on the upcoming magnificent moon saying: “If you’re in Times Square, you’ll see the full moon right above you. It’s going to be that brilliant.”

Only those spending New Year’s Eve in the states, Canada, Europe, South America and Africa will enjoy the extra party favor. Those in Australia and Asia can see the bright moon on New Year’s Day, making January a blue moon month for them. But those on the Eastern Hemisphere have the added bonus of a partial lunar eclipse on New Year’s Eve. This is when part of the moon enters the Earth’s shadow, according to the Associated Press.

The next blue moon on New Year’s Eve won’t take place again until 2028.

Enjoy this “once in a blue moon,” brilliant sky. Happy New Year Arizona!

Blue Moon Folklore: “Historically, moons were given folk names, twelve each year, to help people to prepare for different times of the year and the related weather and crop needs. Names varied with locality and culture, often with descriptive names such as harvest moon, growing moon, snow moon, and egg moon. Most years have 12 moons (giving 12 names), but in the years with thirteen full moons the monthly “seasons” would be expected to come too early – for example, hens would not recommence laying their eggs by the fourth full moon since it was still too cold – so the early moon was named a ‘blue moon’. This then re-aligned the rest of the year’s moons and ‘seasons.’”
Wikipedia