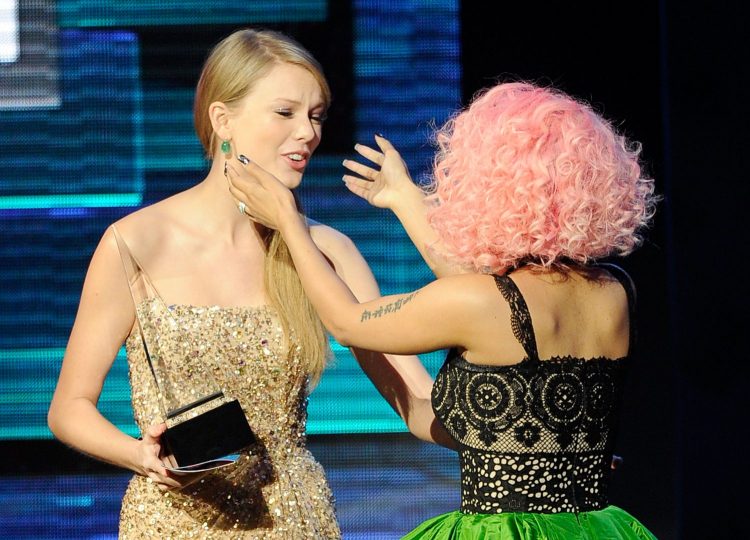 As we all get excited for MTV’s 2015 Video Music Awards in August, celebrities also prepare and anticipate who will take home the coveted awards.  The nominee list was released this today, leaving many stars satisfied and others questioning why their name was left off the list.

When Nicki Minaj didn’t see her “Anaconda” music video on the list, she tweeted:

If I was a different “kind” of artist, Anaconda would be nominated for best choreo and vid of the year as well. 😊😊😊

If your video celebrates women with very slim bodies, you will be nominated for vid of the year 😊😊😊😊😊😊😊😊😊😊😊😊😊

These tweets offended nominee Taylor Swift, also nominated for 8 other VMA’s, who tweeted back at her the following tweet.

@NICKIMINAJ I’ve done nothing but love & support you. It’s unlike you to pit women against each other. Maybe one of the men took your slot..

The responses between the two continued until Taylor put up the white flag. This miscommunication between the two is the first of celebrity VMA drama, over a month out from the actual award ceremony.

@NICKIMINAJ If I win, please come up with me!! You’re invited to any stage I’m ever on.

Fans from both sides came to the rescue. Some, saying Taylor shouldn’t have taken the tweet to be about her.  Nicki said her posts were intended to be against the white media.  Taylor’s fans are defending her by saying her Video has Kendrick Lamar in it, so the “women with slim bodies” comment was clearly a jab at her.

@taylorswift13 @NICKIMINAJ Sorry Nicki but the only ALL WHITE act to be nominated was Sheeran Obvious jab at Taylor🐞 pic.twitter.com/pCUuAYB0SE

@taylorswift13 @NICKIMINAJ lol Taylor why are you making this about you? It’s about the fact that Nicki’s video was live

To view the full list of VMA nominations, visit MTV’s website.  Tune in on MTV on August 30 to see who wins each category, as well as what drama does or doesn’t unfold with Nicki and Taylor.