From Michael Phelps’ insane 12,000-calorie diet to the 1,500-calorie diet of an average sprightly fencer, Olympians from around the globe constantly dazzle and amaze the mere mortal.

To put into perspective just what several thousand calories looks like, the creative website Nowness commissioned art duo Sarah Parker and Michael Bodiam, along with the Olympic sports nutritionist Dan Bernardot, to devise five hypothetical Olympic diets (e.g. male triathlete, female hammer-thrower) and translate them into artistic form by arranging everything the athletes would eat in a single day onto a giant plate.

Diet of a Female Artistic Gymnast.

“Many of these athletes have such enormous energy requirements and they’re so metabolically capable you could practically throw anything down the gullet and they’d be able to burn it,” says Benardot of the seemingly counterintuitive food choices, like the 2282-calorie diet of peanut butter and bagels for a 17-year-old gymnast.

Parker used laser-cut MDF, card and paper to develop the place settings around the miniature-looking real food products, saying, “I wanted people to be able to draw direct comparison between the diets, and to produce something quite playful that subtly hinted at the sport each athlete participated in.”

Diet of a Female Hammer-Thrower

Note: The food representations in the photos are the actual foods, just accessorized by a super large plate and complementary kitchenware.

See the rest of the Olympian diets over at Nowness. 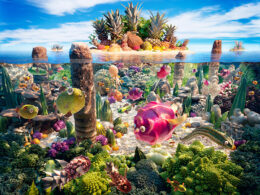 Landscapes made from fruits, vegetables, cheese, bread and meat.
byChristina 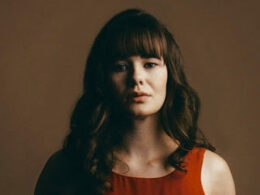 Meet Piera Van de Wiel, an inspiring singer/songwriter who is using her music to establish connection amongst us all.
byTyler Hollis 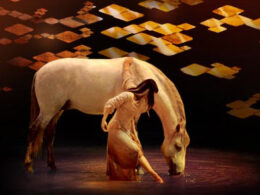 Combining equestrian beauty, performing arts and multimedia, Cavalia is unlike any other production brought to the stage. Arizonans…
byJackie 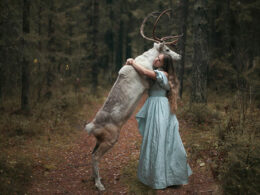