Because pizza is pretty much its own food group, why not enjoy some for breakfast? But instead of slapping that pepperoni slice in the microwave, try this recipe from Scramble, a breakfast-and-lunch eatery in Phoenix: Alma Brizza (garlic, spinach and mushroom breakfast pizza).
Brizza Dough (at-home cooks can also use store-bought dough)
1 lb High Gluten Flour
1 Cup Ice Water
1 Tsp Dry Yeast
½ Tsp Granulated Sugar
½ Tsp Salt
1 ¼ oz Salad Oil (any light vegetable oil)
Place flour in a large mixing bowl. Mix salad oil, yeast, salt, sugar and water in a separate bowl until the yeast dissolves then add the mixture to the flour. Mix for approximately 15 minutes or until smooth. Remove dough form mixing bowl and place on an oiled cutting board. Cut dough into 4 balls and begin to shape by folding the dough ball into itself. Place dough balls onto a oiled sheet pan with at least 2 inches of space between each ball. Brush the tops of the balls with oil, cover with plastic film and place in a refrigerator for 3 hours. Remove the dough balls and place them on a flour covered cutting board. Dust the dough balls with flour and begin to flatten them with your hands while making sure to retain their round shape. Once flattened, pinch the edges around the dough creating a ¼-inch lip. Spin the dough by hand until it is 9” round. Redefine the lip and place in a 300 degree oven for 5 minutes.
Hollandaise
4 Egg Yolks
3 ½ Tbsp Lemon Juice
1/8 Tsp White Pepper
1 Tbsp Water
1 Cup Melted Butter
¼ Tsp Salt
Create a double boiler and bring the water to a simmer. In the top of the double boiler combine egg yolks, white pepper, lemon juice and water. Once you have whisked together the initial ingredients begin to add the melted butter to the top boiler 1 oz at a time while whisking constantly. Continue the process until all of the butter has been added whisk in the salt and remove from the heat. Keep a lid on the pan to keep the sauce warm until it is ready to serve.
Finished Alma Brizza
1 Brizza Dough
2 Scramble Eggs
¼ Cup Marinated Spinach Leaves
¼ Cup Sauteed Mushrooms
¼ Cup Monterey Jack Cheese
1/4 Cup Hollandaise Sauce
In an oiled frying pan scramble eggs. Place 1/4 cup hollandaise on the Brizza dough and spread evenly with a spoon or spatula. Evenly top the hollandaise with the scrambled eggs followed by the marinated spinach leaves and sautéed mushrooms. Top all ingredients with Monterey Jack cheese and place in a 400 degree oven for 4 minutes or until the cheese has melted and begun to turn light brown. Remove from oven and allow to sit for 1 minute. Cut into 4 slices, serve and enjoy. This recipe makes four 8-inch Brizzas. 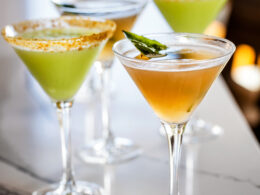 Tommy Bahama is set to launch its latest book, The Marlin Bar:Cocktails with Tommy Bahama, that will feature the most signature drinks and appetizer recipes.
byTyler Hollis 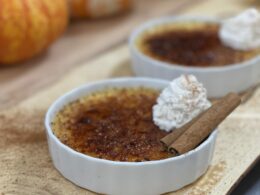 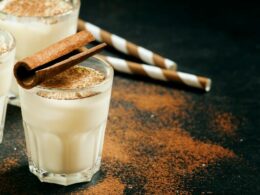 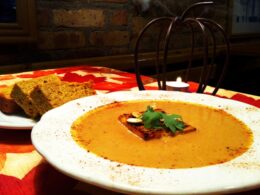 While pumpkin pie, pumpkin cookies and pumpkin lattes are often tempting our taste buds this time of year,…
byMelissa