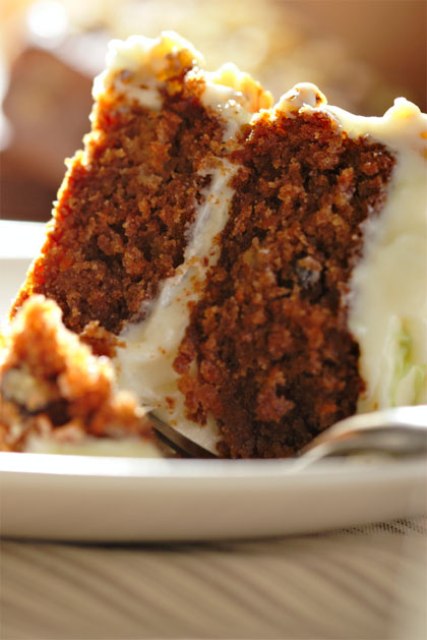 Isn’t Easter time a great time to have a sweet tooth? I know that Christmas gets a lot of love from treat lovers, but I can never pass up a caramel-filled Cadbury egg. (What other time of the year would someone allow themselves a chocolate shell filled with caramel?!) And let’s not forget Peeps, jelly beans, malted robin’s eggs and bunny-shaped chocolate. One other sweet that gets a lot of play during Easter is carrot cake as it is the Easter Bunny’s favorite, after all. To satisfy your carrot cake craving, here are four Phoenix- and Scottsdale-area spots dishing up a tasty slice.

Ten Layer Carrot Cake at Ocean Prime Nope. Your eyes do not deceive you. Phoenix’s Ocean Prime, located at CityCenter at CityNorth, dishes up a 10-layer carrot cake that you’ve got to see to believe. The amazing cake is topped off with cream cheese icing and pineapple syrup. http://www.oceanprimephoenix.com/.

Carrot Cake from Nothing Bundt Cakes Nothing Bundt Cake offers a classic carrot cake, with bits of yummy carrot and pineapple and tasting if nutmeg and cinnamon, and is topped off with a cream cheese icing in the cake company’s signature drizzle. http://www.nothingbundtcakes.com/.

Carrot Cake from The Deli Queen Creek’s The Deli might be a ways away for Phoenix residents, but it’s worth the trip for a peice of the restaurant’s massive carrot cake. Though the moist cake is certainly large enough to share, you probably won’t want to. For the price ($4.50), just order two. http://www.thedeliqc.com/.

Carrot Cupcakes at GoodyTwos Toffee From April 18 to April 23–made especially for the Easter holiday–Scottsdale’s GoodyTwos Toffee will dish up amazing carrot cupcakes. (Didn’t know the ladies at GoodyTwos did anything but stellar toffee? Think again!) The cupcakes are crowned with cream cheese frosting and–you guessed it–a tasty toffee crunch. http://www.goodytwos.com/.