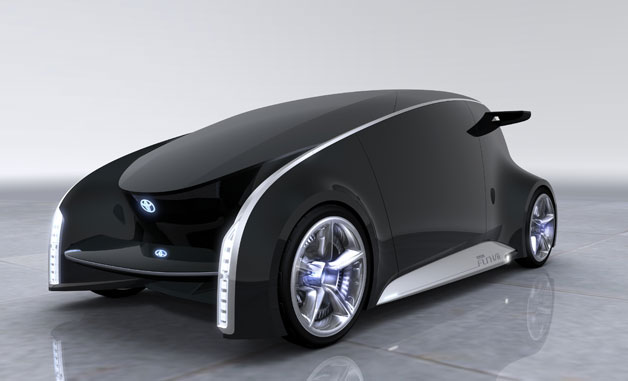 Each year at the Tokyo Motor Show the automotive world must set their collective eyes to stunned as boundary pushing concept after boundary pushing concept is unveiled.  This year Japan’s own Toyota brand delivered the goods with the “Toyota Fun-Vii”1, a concept vehicle that heralds a not-too-distant future where people, cars and society are linked.

The basic idea behind this concept vehicle is “augmented reality”.  Augmented reality is defined as a live, direct or indirect, view of a physical, real-world environment whose elements are augmented by computer generated sensory input such as sound, video, graphics or GPS data.  This is much different than virtual reality, which was much hyped in the 1990s but quickly faded into obscurity, at least as a working definition for any real technology.  In virtual reality the world is shut away from the user, and a new and completely synthetic world is created in a vacuum, free from other sensory input.  With augmented reality, the existing world is modified, overlaid and customized through the lens of technology.

This is where the definition of “lens” has to undergo tweaking.  If one is viewing the stars through an iPhone app, then the app is the lens.  With the new Toyota Fun-Vii concept, the vehicles surface is the lens, creating an altered, or augmented, reality upon the actual surface of the vehicle, inside and out.

The ultimate in personalization functions offer the ability to alter the content displayed on the interior and exterior of the Fun-Vii with the same ease as downloading an application. For instance, the whole vehicle body can be used as a display space, with the body color and display content changeable at will. This allows the entire vehicle to function as a terminal for displaying messages or other information.  This can mean changing the color of the vehicle at the touch of a button, or displaying a painting upon the surface, all computer generated.

The whole of the vehicle interior also can function as a display space, with the interior freely adjustable to match the mood of the moment. Content such as navigation information is blended seamlessly into the interior through the use of augmented reality. Furthermore, the vehicle’s “navigation concierge” can provide the passengers with driving information and guidance through a vocal interface.

Will we see this on Phoenix Valley streets any time soon.  I predict yes, if soon means 20 years, give or take.  If you want to catch an in person view of the Toyota Fun-Vii sooner than that, then you can count on this concept and others like it being on display at any big North American auto show in the next year.  We just missed the Phoenix Arizona International Auto Show, as well as the LA Auto Show, but keep tuned to Vroom and we will keep you posted.