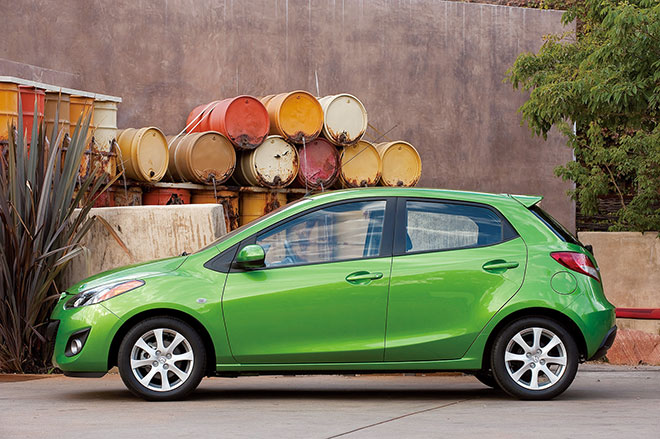 Not much has been heard from Mazda over the past couple of decades.  Sure, they put out quality vehicles at a fair price, but rarely unveil anything worthy of writing home about.  But with their recent unveiling of the new Skyactiv-G 1.3 Engine, that all could be changing.

Skyactiv is a blanket term for Mazda’s innovative next-generation technologies that are being developed under the company’s long-term vision for technology development, Sustainable Zoom-Zoom.  This ambitious strategy involves the comprehensive optimization of Mazda’s base technologies, which determine the core performance of its vehicles, and the progressive introduction of electric devices such as regenerative braking and a hybrid system. All the technologies that are developed based on the Building Block Strategy will fall under the Skyactiv umbrella.

What this means for Phoenix Valley drivers is massively increased fuel economy.  Mazda is doing this by creating an internal engine enviornment of high compression combustion.  Increasing the compression ratio considerably improves thermal efficiency, which in turn increases fuel efficiency by over 15 percent on it’s own.  The standard compression ratio of recent gas engines is generally around 10:1 to 12:1.

Theoretically, if the compression ratio is raised from 10:1 to 15:1, the thermal efficiency will improve by roughly 9%.  However, one of the reasons preventing the spread of high compression ratio gas engines is the large torque drop due to knocking.

Knocking is abnormal combustion in which the air-fuel mixture ignites prematurely due to exposure to high temperature and pressure, creating an unwanted high-frequency noise. When the compression ratio is increased, the temperature at compression top dead center (TDC) also rises, increasing the probability of knocking.

While many Phoenix Valley auto enthusiasts, including myself, may not understand all of the details of the internal mechanisms immediately, the result is still rather astounding:  A nice, modern NON HYBRID vehicle averaging 70 mpg.

Phoenix Arizona auto enthusiasts can view and test drive any of the current production model Mazda vehicles, including the 2011 Mazda Demio, at any local Phoenix Valley Mazda dealer.