Today I am writing to you straight from the rainy habitat of Seattle. Though we did have some lovely sun time and have definitely been enjoying many a local dig like Bakery Nouveau… if you ever have the pleasure of visiting the place I highly suggest the double baked almond croissant. It’s not something I would have ever ordered but we ran into an old friend at the bakery who happens to be world traveler and said these croissants were better than anything he had ever found in Paris… of course how could we argue? I have to say even though the éclairs were about as divine as they could be, the croissants were incredible. So even though an elliptical session was on my list today I am sequestering myself inside this am if for no other reason than to enjoy another movie in our private screening room and review a few more fashion week shows just for your reading pleasure.

One little tid-bit that begs speaking of Tom Ford’s secret show. The master of all things refined of gorgeous…did I say how awe inspiring his debut movie a Single Man was? If you haven’t seen it, run don’t walk to your favorite video place and nestle down for a mesmerizing ride. In any case Mr Ford invited a small select few editors and guests to a hush- hush secret preview of his womenswear relaunch on September 14. Guests were greeted by a slew of delightful greeters dressed in black tie garb holding extra large Tom Ford umbrellas….how royal indeed for the noted king of Fashion! Guests were seated in gilded bamboo chairs while they watched the couture presentation, including the likes of Carine Roitfeld, Anna Wintour and Nina Garcia. Ford introduced each garment and model individually reminiscent of the proper Parisian shows that Coco Chanel herself made famous.. Models included Karlie Kloss, Abby Lee Kershaw, Daria Werbowy, Amber Valetta along with notable actresses Julianne Moore and Lou Doillon..

Though no other photographers were allowed except Ford’s go-to photog Terry Richardson, bits of info about the collection has seeped into the atmosphere. Everything from leopard trenches and pants, to silk fringed gowns, sheer silk tulles, corsets and even tuxedos were part of the collection. Overall the tone of the relaunch was tons of glamour and sexiness in that classic Tom Ford way, colors included cobalts, olives, grapefruits and of course the requisite black.
I for one can’t wait to see the entire collection in the flesh, but for now just a sneak peek and a few recon photos. 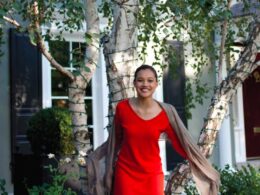 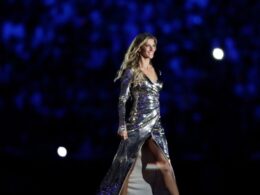 All About Gisele’s Rio Olympic Dress 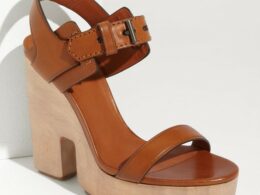 I decided to add to my fall wardrobe this weekend and found myself, as I always do, wanting…
bydiane 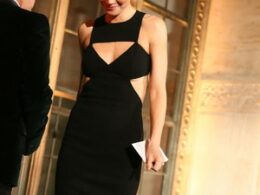