The Paris Runways have been on fire with some amazing shows over the last week or so, The anticipation of Chanel collections is always high and this season is no exception.

Editors dubbed the collection bleak-chic as a heavy post apocalyptic theme hit the catwalk The set itself boasted gray ashy rock and deep planks of wood which created the dingy and ultra long runway perfect for the occasion . At times the endless planks were interrupted by large ashy boulders which attendees had to navigate on the way in. I will say this Lagerfeld is nothing if not creative. Every season he creates a world ready for us to immerse ourselves into and dream. Rarely ever are we bored by his latest and even though this collection had some surprising elements still there were plenty of Chanel-ism’s to delight the senses. Personally, I can never get enough of black and white, but apparently the rest of the world needs a little color from time time leaving editors to ask… will this collection be a hit on the racks? Only time will tell!

Women’s Wear Daily had this to say about the collection:
While the set unintentionally played to the dark mood still weighing on Paris, its true purpose was a fashion clue: Say au revoir to chichi, ladies! At least for fall. Because in its place is something rarely dominant at Chanel: a collection based on men’s wear. And not of the dandified or tuxedoed variety, but one that found its attitude in a toughened spirit and its savoir faire in those fabulous tweeds. 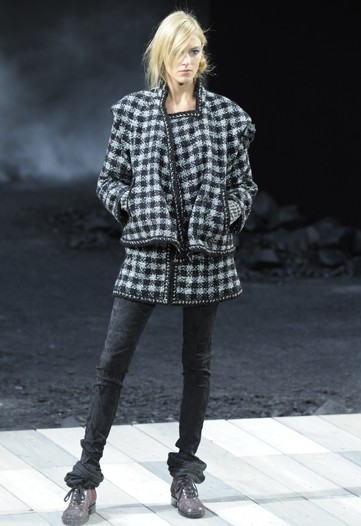 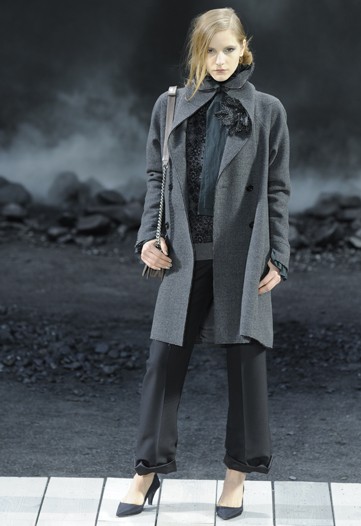 The collection was virtually all black, gray and white, in various tweed configurations, often with jolts of pizzazz supplied by glittering silver metallics. The jackets looked new and savvy: what appeared to be two, a Chanel classic layered over a mannish version, was actually a single piece. These were worn over pants, as Karl made a major statement with trousers either cuffed above or bunched at the ankle. 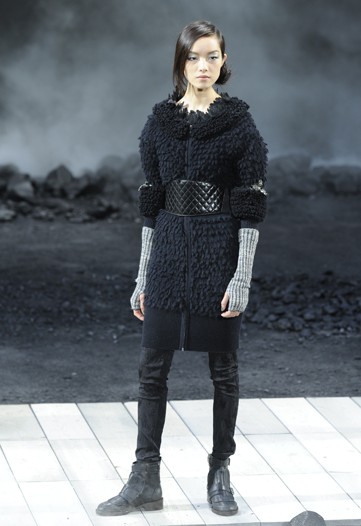 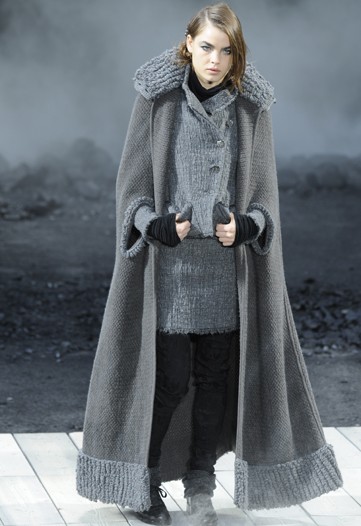 But he didn’t stop there, embracing the onesie in the sturdiest of incarnations — utilitarian jumpsuits in thick tweeds, quilted handbag leathers and other fabrics, some made tougher with the addition of bold leather thigh pockets. Lagerfeld loved the look so much he carried it into evening, sometimes delicately, sometimes not. Even his gowns mocked the notion of evening delicacy; two tweed stunners were equal part audacity and allure. 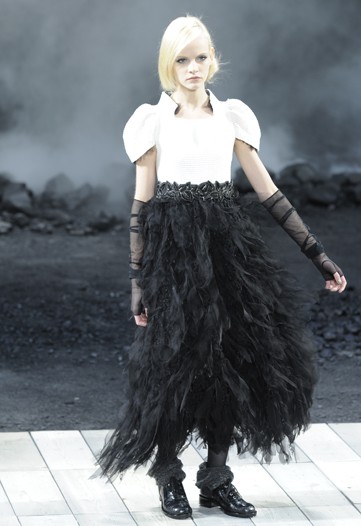