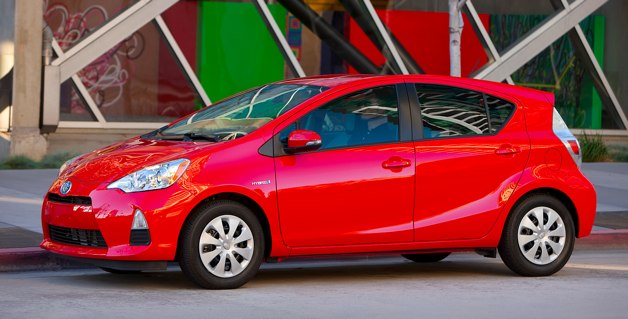 It is finally here, the much anticipated sequel: The 2012 Toyota Prius C

The Prius C offers something markedly different than the regular Prius(which is of course still available). The Prius C is not only more compact than its bigger sibling, but it is also much more stylish, with a back end hatch and tail lights that manage to mix a glimpse into the future while also conjuring a past of bow tie tail lighted 1950s American classics. One of the other unique aspects of this vehicle is that it will come with a starting price of $19k.

Is the $19k base version a tad on the uber basic and minimalist side? Yes, of course. The key feature here, the one that sets it apart from the regular Prius, is that a fully decked and luxurious version of the Prius C will likely not creep too far past $23k. For an original Prius that price would be well over $30k. Either way, the vehicle comes with an estimated fuel economy rating of 53/46/50 miles per gallon (city/highway/combined) from the EPA, the highest rating for any car without a plug, so no matter what the price tag says, a handsome initial savings is only the icing on the cake.

There will be four trim levels for the Prius C. Fortunately for many Phoenix Valley residents, the higher trim add ons tend to focus around weather(fog lights, heated seats, and so on), which wont be coming in very handy in the desert. At least things like automatic climate control, Bluetooth phone controls and remote keyless entry all come standard.

This is the perfect vehicle as either a first car for a college student or someone just entering the work force, a second car or utilitarian driver for someone that might want to keep their Maserati in the garage when they go to pick up Mr. Fluffles from the vet, or for only the most daring environmentalists and survivalists,The Prius C can make a fine daily driver to meet a variety of needs. The Prius C will be hitting Phoenix Valley show rooms in March.