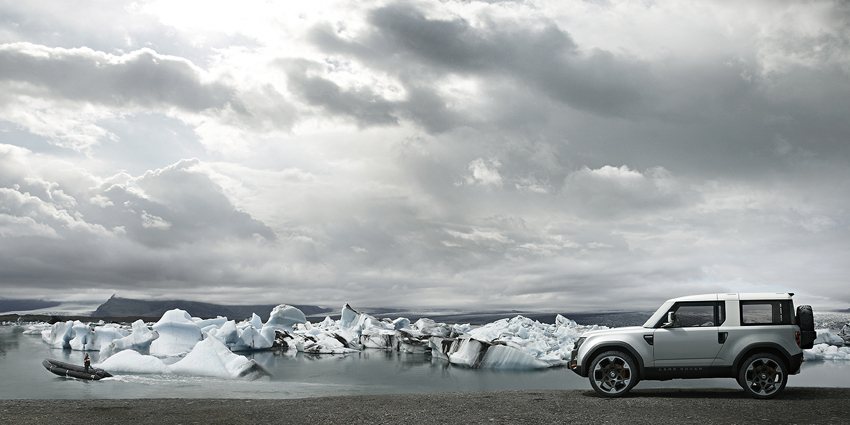 The new Land Rover DC100 concept has just debuted at the Frankfurt Motor Show, ousting every other SUV concept at the event as the most anticipated production vehicle for the near future.  Land Rover answered these vocalized anticipations with the announcement that the vehicle is intended as the 2015 replacement for the Land Rover Defender.

Functional and purposeful in design, the new Land Rover DC100 concept vehicle blends the old utilitarian “styling” with a sleek and sophisticated exterior design, smooth and curvy in all of the right places, while retaining its trademark simple and masculine aesthetic.  While no specific details concerning the engine have been revealed, it is likely to be based upon recently introduced high performance four cylinder engines, like the 2.2-liter four-cylinder turbo-diesel recently introduced in the European Jaguar XF, where it produces 187 hp and 332 lb-ft of torque.

Commenting on the Land Rover DC100 concept car, Gerry McGovern, Director of Design, Land Rover said, “Replacing the iconic Defender is one of the biggest challenges in the automotive design world; it is a car that inspires people worldwide.  This isn’t a production-ready concept but the beginning of a four-year journey to design a relevant Defender for the 21st century.”

John Edwards, Global Brand Director, Land Rover added, “Loved the world over for its simple, honest and distinctive design, we are determined that the new Defender will be true to its heritage, while meeting the requirements of a changing global market.  We plan to engage with existing and potential customers to help us finalize the details of the new vehicle.  One thing’s for sure, it’s going to be an exciting journey, and we can’t wait to get going.”